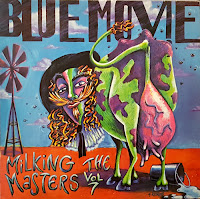 Seems a good bunch of you really appreciated a 1986 album I shared a few years back, Hearts in Clubs, by a San Fran outfit dubbed Blue Movie.   Pretty much ever since that original 2014 entry I've been sitting on the band's follow up, Milking The Masters Vol. 7, so I shan't sit on it one day more. With the Hearts record, I drew analogies between Blue Movie and REM.  That's still applicable to bits and pieces of Milking... but overall this one's a little more diverse, not to mention a tad freewheeling.  At the very least the album jacket is demonstrably representative of that.  Blue Movie do the trick for me when they operate in traditional indie-rock environs, on hearty nuggets like "Almost, Almost Never Works" and "Window With a Bullet Hole."  Elsewhere, the leadoff "Our Cultural Mission" faintly flirts with cowpunk, a la '80s Meat Puppets, and the horn-laden "Revolution Dream" angles in the vicinity of the Minutemen's latter day, non-punk experiments.  Indeed there's wildly divergent vibes popoulating Milking... and even some selections that should have stayed on the Scotch reel, namely the especially egregious "Tammy's on the Telephone."  But fear not, don't let that dissuade you from delving into this otherwise decent LP, which by the way was produced by the Dead Kennedy's very own Klaus Flouride.

Blue Movie do the trick for me when they operate in traditional indie-rock environs, on hearty nuggets like "Almost, Almost Never Works" and "Window With a Bullet Hole.Glass transport Rack  Stone Sample Book