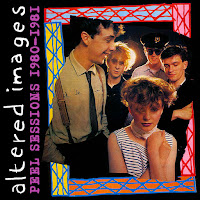 I suppose this one is self explanatory.  I can't purport to be a longtime follower of Scotland's colorful Altered Images, as they never graced my sonar during their original inception.  In fact, it wasn't until a friend encouraged me a few years ago that they were worth investigating beyond their bubbly signature piece, "Happy Birthday."  Correct he was, and I really got hooked on their debut, Happy Birthday, in spite of it's ubiquitous title track.  I was delighted to discover some genuinely edgy, post-punk nuggets "Beckoning Strings" and the even more serrated "Midnight," which oddly enough I found reminiscent of early U2.  Those tunes and more made an appearance on a clutch of Altered Images Peel Sessions.  There are three sessions total here, the first two cut around the Happy Birthday era, and the third situated during the time they were prepping material for their sophomore LP, Pinky Blue.  The audio quality is indicative of a two or three generation old tape, as the Images Peel recordings never officially made their way into the marketplace.  On the other hand, expanded versions of the band's three studio albums have recently been boxed up by the good people over at Cherry Red Records on convenient five inch aluminum disks, and is a recommended purchase if you find yourself enamored with any/all of these dozen tunes.

Thanks.Always had a crush on Clare Grogan.

Thanks for your sharing.nice Plastic Injection Molding Company  for you.

Little known fact, Steve from Siouxsie & the Banshees produced their first single (they were the support band). Always had a soft spot for Altered images.

Saw them live, once in Spring 1983, was pleasantly surprised! Any chance of a re-up as the link is now dead? Thanks

Can you reup please?