It's seems a trivial pursuit now, but it's the only game in town... 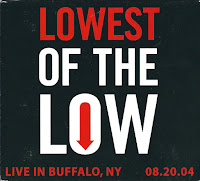 I think this one will have special relevance to my Buffalo and Toronto peeps.  It's not often when a band garners a stronger following in a city/country other than one they're indigenous to, but so be it the case of TO's Lowest of the Low.  Circa 1991 in Buffalo, NY, the city just 50 miles south as the crow flies, there were hoards of early and enthusiastic adopters of the Low and their auspicious debut, Shakespeare My Butt.  With the now-renown Ron Hawkins at the helm, spewing diatribes, anecdotes and clever truisms galore, western New Yorkers caught the Low's indelible bug from the get go, as word of mouth spread rapidly - all pre-web mind you.  Pair Hawkin's timeless tact for writing with a melodic indie rock penchant and you have a formula that should have infiltrated the entire continent, but Canada and a sweet chunk of the Empire State would have to suffice.

This 2004 show technically took place in Williamsville, NY, an affluent suburb, not the city proper.  It was supposed to be an outdoor gig, but the weather failed to cooperate, so it was moved to a venue that unfortunately isn't identified on the sleeve.  Hawkins mistakenly refers to Williamsville as Williamsburg, stating mid-set to a packed crowd that "the entire burg must be here!"  Of course, he's almost immediately corrected.  Spanning two hours, the show naturally draws robustly from Shakespeare, but listeners receive nearly as much fresh tunes that would be released one month later on the Low's third and belated LP, Sordid Fiction.  Despite omitting much of the best material from their sophomore record, Hallucigenia, the setlist cranks, and their performance does in kind.  The band's characteristic charm is doled out for miles and miles, and multiple encores ensue.  One thousand copies of the show were pressed on CD and sold through Maple Music, never to be seen again...but once in awhile you'll luck out browsing in a used bin.  All of the evidence is yours for the taking below, in either MP3 of lossless FLAC.

Disk 1
01. Dogs of February
02. Just About "The Only" Blues
03. And Then the Riot
04. For the Hand of Magdelena
05. Everywhere and Nowhere
06. The Sharpest Pain
07. City Full of Cowards
08. Last Lost Generation
09. New Westminster Taxi Squad
10. Darkhorse
11. Eternal Fatalist/Letter From Bilbnoa
12. Your Birthday Party
13. Turpentine
14. Giulietta the Just