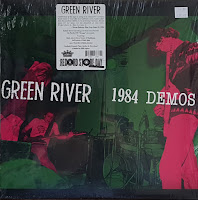 I feel it would be jumping the gun to throw one of today's new Record Store Day releases out there for public consumption, so how about one from a couple years back instead?  The title of this all too limited edition platter is either going to lure you in or not I suppose.  Seattle's late and stupendously great Green River were a hot mess even when they got around to recording proper albums including such wrenchingly angsty missives as the Dry As a Bone ep and Rehab Doll, but a messy ending almost always entails an even sloppier genesis.

This LP of nine nascent recordings was essentially tracked in prep for the band's debut, Come On Down, though few songs from this session actually carried over to it.  If you're familiar with that one you know it's a bit of a winded slog of a record, that hit the market before Green River truly perfected that "groove" thing.  Sort of the same premise on these nine cuts, but, wherein future Mudhoney-mates Mark Arm & Steve Turner alongside a pre-Mother Love Bone/Pearl Jam Jeff Ament (no Stone Gossard yet, kids) clad bluesy metal to bratty punk bravado, a formula that would eventually yield, you guessed it, the "G" word.  The building blocks lie in waiting at their feet, but weren't quite cemented on the howling "Leeech," and the mildly doomy "10,000 Things," the later being re-cut to better effect for a contribution to the Deep Six compilation in '86.  At this stage in the game, Arm and friends strike me as more convincing on viciously punkier salvos "Means to An End" and "Take Me."  Best of all, this compendium features an early incarnation of a tune that would be worked to utmost perfection as an early Mudhoney b-side, "Baby Help Me Forget."  I won't give any more away than I have thus far.  Have at it.

Thanks! Never heard this, nice the hear the original version of Leech. It’s hard to seperate the song from Melvins now.

Is there any possibility that this could be re-posted?
Thanx