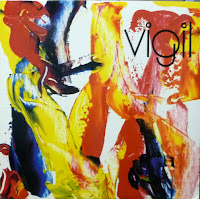 Don't let the paisley album jacket fool you, as the Baltimore quartet responsible for it weren't cut from psychedelic stock in the least.  Starting life as Here Today, the band inexplicably took up a new moniker (Vigil) upon inking a deal with CBS Records in '84.  Problem was their album was in limbo for three years due to personnel changes at the label, and ultimately, Chrysalis came to their rescue.  Ostensibly Vigil were marketed as "alternative" product, if only for their mildly noir bent that didn't slot comfortably into the new wave mold.  Side one includes "I'm Waiting" and "I Love You Equinox," both suggesting what a mainstreamed Bauhaus could have conjured up had Peter Murphy and Co. been sufficiently cash-whipped.  The other side of the coin entails the inspired, post-punky "Whistle in the Yard," a piece that was originally written and tracked in '83 when they went by their former name, while "Celiba Sea" (get the pun?) finds these lads on a particularly tuneful tear.  I apologize for the fidelity here, as my secondhand vinyl copy had apparently endeavored one too many rotations from it's former owner.  Vigil made it onto CD, but copies are exceedingly scarce.  A second album, Onto Beggar and Bitter things was apparently recorded on Chrysalis' dime, but the label opted not to release it.  Left to their own devices the band distributed it locally on cassette circa '89 or so.  Check out Vigil's corner of Facebook here.

I'm really happy to see this one. Here Today was a big favorite when I was in high school . . . even punk bands liked covering "Whistle in the Yard."

You are, as always, a treasure.

You as well. Thanks.

Check out their facebook page for info regarding some "new" old material being released on CD for the first time.. hopefully before spring 16

Thanks for re-posting this! I really dug this when it first came out. I was able to get a CD-R of the 2nd release from the singer awhile back. This is hard to find on CD, but not as hard to find on vinyl if anyone wants a physical copy.

I would be so grateful if you'd repost this again... I recently lost my copy and I miss it SO much. This is a band with lots of memories for me!

Hi, Any chance you can re-up the S/T album by Vigil? Thank you!