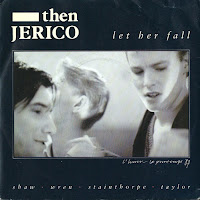 So I've had these guys on the brain since name-checking them a couple nites ago.  I gave you the lowdown on Then Jerico in my entry for their enrapturing debut, First (The Sound of Music) eons ago.  Hailing from London, TJ were not of indie stock to say the least, signing to a major not long after their formation in the mid-80s.  Even if their ambitions weren't as epic as say, U2, they were still batting in the same ballpark, with rousing fireballs like "Let Her Fall," arguably bordering on the anthemic.  This is the same version that appears on the album, backed with a non-LP number, "Searching," which oddly enough manages to incorporate a few verses from Grandmaster Flash's "The Message."

A. Let Her Fall
B. Searching