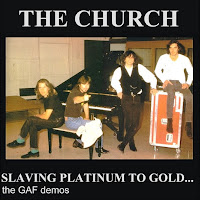 I was considering saving this for one of my world famous Chanukah features, but since these were at one point in wide circulation online, I assume this is a old news to many of you.  In a nutshell, The Church have long been a top tier favorite of mine, with 1990s Gold Afternoon Fix easily earning a spot in my hypothetical list of their five best albums.  It's almost by sheer coincidence that Steve Kilbey and Co, tracked working versions of GAF to begin with, as typically they were never accustom to doing so on prior albums.  Blame it on the behest of their label at the time, Arista, for insisting they submit demos before executing the finished product.  Given their most recent LP at the time, the international breakthrough Starfish, went platinum in the United States alone, the suits wanted to be assured their new "cash cow" wasn't about to gum up the works.

Ultimately, Gold Afternoon Fix was green-lighted by the label, and though it failed to produce a hit as universal as "Under the Milky Way," the band's vision for the record wasn't clouded by frowning executives.  I gauge this by virtue of these demos generally bearing the same arrangements and sonic inflections as the album versions (albeit a trifle rough around the edges, naturally).  Per this well-maintained Church fan page, the first eleven cuts eventually found a home on the GAF, with seven more winding up as B-sides (later consolidated on the import-only A Quick Smoke at Spots). The final selection, "Wardance" is exclusive to these recordings. No mondo revelations here, rather Slaving Platinum... is a treat designed with the dedicated acolyte in mind.  As mentioned above these tracks were made available on a Church website in the early '00s and were resident there for a good ten years before apparently being removed.  The relatively low bitrate is not my doing.  Hope you enjoy nonetheless.

Thank you for this. I am a big fan yet never knew these demos existed.

Cool! Just getting re-obsessed with this band.

A true public servant, you are!

Editing/production is one of life's mysteries. Something is gained but often, also, something is lost. I know from my own (amateur) bands, my favorite take is likely to be some practice tape that never makes it to CD. These GAF outtakes are not necessarily better than the album -- a few might be, I'm still deciding! -- but they are helping me hear and finally "get" some of the songs I've listened to for years. It's very cool. Big thanks for sharing.

Glad you enjoyed them! It was a fun project to put together, getting these out to fans. It literally came from a recording studio trash can, from there to a dresser drawer for years, and from there to me. Myself and a few fellow fans took it from tape, mastered it, then mailed out over 1000 CDs for free to other fans worldwide. It needed to be heard!