Answers gone till I don't know when. 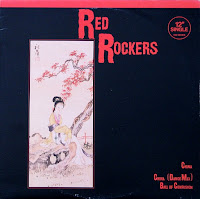 I really don't have much of a spiel to relate on how I became a Johnny-come-lately fan of the Red Rockers.  Saw the video for "China" on 120 Minutes or late nite MTV.  Loved the song, bought a cassette of Good As Gold, and eventually picked up the Good As Gold/Schizophrenic Circus twofer CD when it was reissued in the '90s.  And while I haven't had much to share by them heretofore, I've namechecked ze Rocquers of Rouge at least a dozen times when making band comparisons and such over the last eight years.

The band's segue from the pronounced punk ethos of their debut single (and subsequent 1981 LP Condition Red) to the cleaner and not so meaner new-wave inflections of the aforementioned Gold, must have been a bit startling to RR's early minions.  I'm sure there must have been a few faint cries of "sellout," but they were likely drowned out by "China's" keen, melodic prowess and poetic moxie.  A phenomenal song in all respects, and the contents of the promo 12" for it are presented below.  You get the straight version, a cliched dance remix, and a non LP cut, an interesting reworking of the Temptations "Ball of Confusion," which features uncredited female backing vocals.

A. China
B1. China (dance mix)
B2. Ball of Confusion (That's What the World Is Today)

'China" was a great pop song, and so was their next LP swan song, "Schizophrenic Circus", but i remember, when I lived in AZ and CA guys I was in a band with LOVED their US-Clash period before this, with songs like "Guns of Revolution", and indeed, screamed SELL OUT, but i dug the poppier side!!!! Thanks!