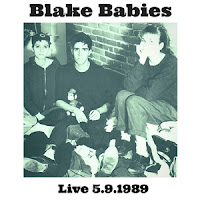 Just wanted to give you a heads up on a 1989 Blake Babies recording that surfaced today via Noisetrade.  It's an eleven song show performed on WERS radio in Boston somewhere contemporary to the era of the Babies Sunburn record.  And speaking of albums and such, a reissue campaign of the band's entire catalog is in the offing, albeit with few details being reported at present.

The WERS performance may or may not be available indefinitely so don't sleep.  BTW, they're suggesting a donation of $6, but ultimately it's at your discretion.  Check out a recent post I did on the recently reconvened Juliana Hatfield Three here.
Posted by spavid at 8:35 PM