The Trilobites - Turn it Around (1987, Waterfront) 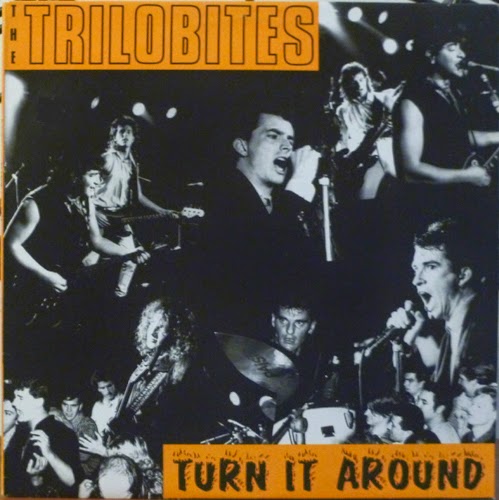 My first encounter with Sydney's Trilobites was on a college radio station via a tune called "Why Can't I Remember" a taught, sturdy exercise in driving post-punk a la the Godfathers (the band) and to a lesser extent the Jam.  It wasn't long before I purchased the 1988 ep it was derived from, I Can't Wait For Summer to End.  Over the years I learned there were a spate of releases that preceded it, available in small quantities with little to no distribution in the States.  I happened upon a used copy Turn It Around a few years ago, and mistakenly assumed it was a studio record.  Instead, the nine incendiary blasts it houses are culled from a live 1987 gig at Caringbah Hotel in New South Wales.  The audience applause bookending each song strikes me as suspiciously canned, but nonetheless I take the Trilobites at their word, as they proceed to blow the damn roof off the joint.  Containing their signature single side "American TV," as well as other pounding, adrenaline fixes like "Come to Where It's At" and the title cut, the band sounds less stifled in a live setting, and makes the case for them even more effectively than the aforementioned ep.  We receive a couple of choice covers to boot - The Records "Teenarama" and the Paul Collins Beat classic "Walking Out on Love."

killer release. do you happen to have Bedhead's Beheaded?

Sorry, I don't have this.

Diggin' it, thanks again for your delicious auditory awesomeness.

a good one! i remember buying this when it came out, and here in Boston, i was surprised to see them cover the Blackjacks, as well as the Beat, Barracudas and the Records...they DID have some great originals in them-i wonder why they chose all the covers? thx again!

The recording is indeed live at the Caringbah Inn - I was there the night it was recorded. The audience, however, was dubbed in from the Springsteen "Live '75-'85" box set....

Been looking for a good copy of The Trilobites first cassette 'Let's Pump'. Anyone know where I could find it?

You can have a look in YouTube, you will find both sides of Let's Pump Cassette.
I've downloaded them with Freemake Video Downloader and converted the MP4 file into MP3 with dBpoweramp after i've cut the tracks with MP3DirectCut and tagged them with MP3Tag. It works and the sound is really "audible".

Or maybe i can upload it to a server and pass you the link.

The Cassette is really cool with pretty good covers.

"The Trilobites - Let's Pump" MyAirBridge Link for download is :

Hey Iñigo. Thanks for going to the trouble of sharing this. Listening now. I couldn't get that AirBridge link to work though. Said the file was missing.

The link isn't working anymore. I used to listen a lot to this back in the 90s and I'd really love to get a copy. Can't seem to find it anywhere. Would it be possible that you reuploaded it? Thanks!

So where is the petition to have them perform again??????

Wich one, Turn it around or Let's pump??

This is great dynamic stuff. Thanks for re-upping....