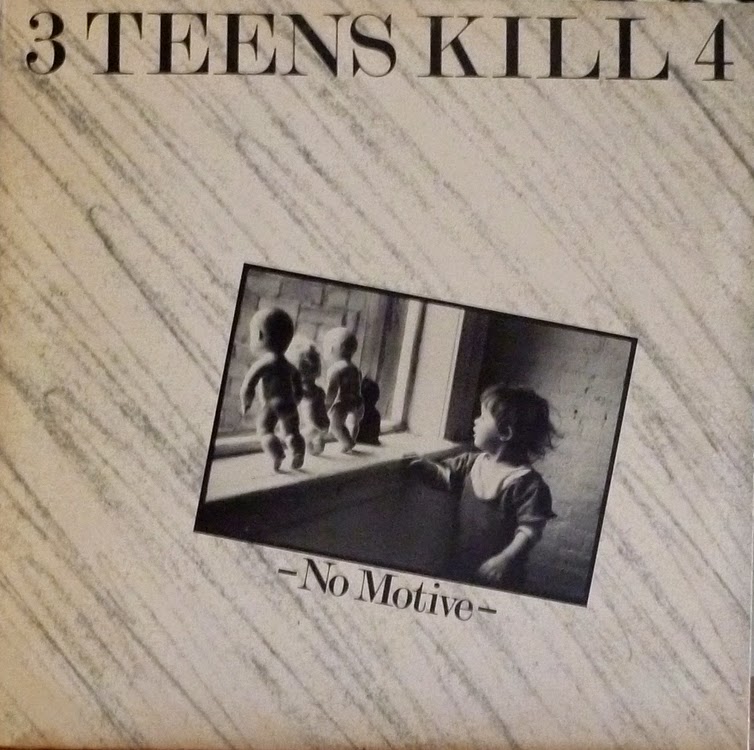 It's feeling like a pretty random week, so here's one of the most unusual and adventurous records in my archive.  Truthfully, I bought this on a whim based on the spiffy sleeve art.  3 Teens Kill 4 were a highly avant, co-ed contingent of audio manipulators from New York, all bearing roots in the fabled East Village arts community.  Steeped in art-damaged post-punk, The Teens served a tossed salad of funked up rhythms, chanted vox, minimalist synths, samples, sound byte collages and even some occasional proto-hip hop tactics...albeit these traits rarely surfaced in unison.  I've seen references online that lump this quintet with the no-wavers and such, but frankly 3 Teens were too sophisticated and overwhelming for that tricky gaggle o' geese, not to mention subversive.  An apt case in point is a bizarre re-rendering of the Chaka Kahn and Rufus classic, "Tell Me Something Good," which is interspersed with news clips concerning the 1981 assassination attempt on Ronald Reagan.  Surprisingly, there's a healthy amount of detail to be had on 3 Teens Kill 4 online, including a Wiki article (linked above), a Facebook hovel, and this.  Member David Wojnarowicz, who became a relatively renown artist in his own right, passed away in 1992.

From the description seems like nothing I would like, but it's on the d/l as I write. Plus agreed on the good cover art!

It's make me feel like it was all worth it when I read blogs like this. Thanks for the compliments.
Jesse Hultberg - member of 3 Teens Kill 4 no motive.

You're welcome Jesse. Thanks for checking in.

Newsflash - the vinyl album has been remastered and reissued on Dark Entries Records
with 3 songs that have never seen the potatoes in our ears :-)
You can get it here (sorry in advance if this is not allowed)
http://www.darkentriesrecords.com/store/vinyl/3-teens-kill-4-no-motive-lp/#tab-description
xox
Jesse Hultberg