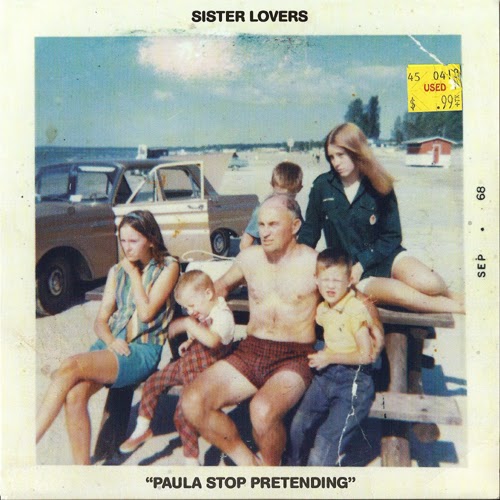 And just when I thought 99¢ couldn't buy squat anymore, I came across this at Sonic Boom in Toronto last year.  With a name like Sister Lovers this Vancouver quartet had to have a jones for Big Star, right?  Perhaps, but it isn't the least bit evident on these four songs.  S/L do however pay homage to prematurely deceased Pandora's front-woman Paula Pierce on the title track, a bouncy, garage/punk-pop rave up in the spirit of Redd Kross, with loose nods to locals the Evaporators and Pointed Sticks too.  Little did I know that "Paula Stop Pretending," and "Playing on Thru the Bell" (the latter sounding not far removed from what the Figgs were peddling around the same time) were sung by Mark Kleiner whose future outfit the Mark Kleiner Power Trio were responsible for perhaps the best power pop album of 2002, Love To Night.  In fact I only learned of the connection by way of a Kleiner podcast interview conducted by Vancouver DJ extraordinaire Nardwuar on the occasion of a MKPT reunion show earlier this year.

In addition to this 45, Sister Lovers had a cassette album, School Sux that most of us aren't likely to find, however a full length, Friendless was recorded post-Paula that was never released.  To our good fortune the band has made a stream of it available on Soundcloud.   Just to reiterate, the aforementioned Mark Kleiner Power Trio album is phenomenal, and could very well be to your liking even if the Sister Lovers aren't.  You can check it out via Mint Records and iTunes, and I just might have included one of the songs from it as a bonus in the link below.