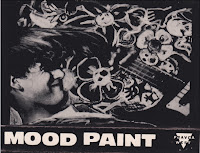 It didn't strike me as a remarkable album at first blush when it dropped in 1993, but Pond's debut album for Sub Pop was an ever so slow-charmer, gradually inculcating it's tuneful guitar crunch and sinewy pitch and sway into my cerebellum over the next several years.  Two respectable albums followed - The Practice of Joy Before Death and Rock Collection, but neither quite held a candle to it's immensely more intoxicating precursor.  While there were pre-album singles, there wasn't much evidence of life prior to Pond.  That was until one of my readers contacted me last year and shared a 1989 cassette by an Oregon trio dubbed Mood Paint who contained in their lineup soon to be Pond stalwarts Charles Campbell (guitars/vox) and Chris Brady (vox/bass).  For better or worse, Mood Paint's easy-goes-it penchant didn't carry over to the frenetic and feedback-ridden noise pop that would be uncorked by these very same hands in the Clinton-era.  That being said, the relatively lucid hue of these half-dozen tunes aren't the stuff of embarrassment, rather the product of a humbler, and dare I say, more approachable muse than the one that was about to come roaring to life in Pond.  A big thanks to Jeff for setting me up with everything!

Could you re-up this one? I had a Mood Paint demo a while ago... but lost it. Would love to add this to my digital collection. Thanks!

Thank you very much! Much appreciated.

Any chance for another re-up? It would be much appreciated!

Thank you so much! This is amazing!