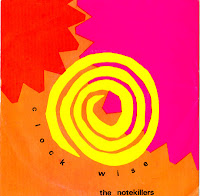 It only take one passionate, hardcore fan to serve as the impetus for an uber-obscure band of yesteryear to come out of hibernation.  Kurt Cobain coaxed the Raincoats to not only reissue their back catalog, but to reform and record anew.  Ditto for Thurston Moore's similar efforts to track down Philly's Notekillers, who in their initial 1977-81 lifespan only managed to eke out this single.  The threesome (occasionally accompanied by a conga player) were proponents of strenuous, instrumental jams that nibbled on the periphery of post-punk and no-wave, with a heightened avant flair.  "The Zipper's" gyrating, serrated edge is carried aloft by David First's raging tide of arpeggios, akin to what the Minutemen would soon be tinkering with.  The pulsing, not to mention near-tuneful penchant of "Clock Wise," bendy guitar licks and all, could have functioned as a template for everyone from Mission of Burma to Polvo.  Definitely not your average vocal-less malaise here.  Both songs appear in slightly different iterations on the Notekillers 1977-81 retrospective comp on Ecstatic Peace, which saw the light of day in 2004, and a full blown new album, We're Here to Help, arrived in 2010.  If you enjoy what you hear please show the band some love here and here.

Netkups seems to be working for me now and yes Spavid the second track in particular totally sounds like some proto-Polvo.

Glad to hear MKV. I wonder if Polvo even heard of the Notekillers...

Hello,
can you please repost this single?
Thank you very much
Stathis