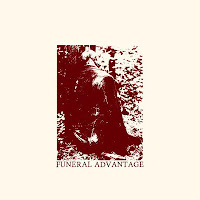 Now this is the kind of band I like taking up space in my email in-box.  Ladies and gentlemen I present to you Boston's Funeral Advantage, the coolest thing come to rolling down the Mass Turnpike since Passion Pit.  Imagine if you will a convention between the Pains of Being Pure at Heart and For Against, with Johnny Marr presiding, and you're well on your way to describing what F/A have in mind.

Their newly minted five-song demo will immerse your senses in sublime, chiming guitar pop, dipped in a modest dream-pop glaze.  There's a slight air of melancholia to Funeral Advantage's low-key pastiche, deviating between grey and shimmering turquoise hues, coloring the calming introductory selection "Back to Sleep" just as vividly as the relatively uptempo "Wedding."  The digital incarnation of their Bandcamp'ed demo tacks on a cover of an ace Cure b-side "2 Late," dovetailing perfectly with F/A's promising original compositions.  For those of you who've been gorging yourselves on My Bloody Valentine's long overdue follow-up, you've just stumbled on the perfect after-dinner mint.

Below is a link to the whole thing, or you can head over to Bandcamp (mentioned above) to stream it...not to mention take the opportunity to fix yourself up with a highly limited and collectible cassette version.

Well Spavid as you stated in another comment box that what you do is a seemingly thankless job but finally that is not the case with this post, I liked this one so let me be the first one to comment with an obligatory thank ya.