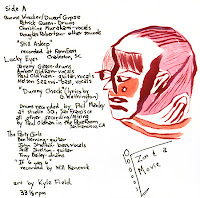 Even with the rampant resurgence of vinyl, one particular species I never expected to see again was the compilation 7."  They were around in plentiful supply back in the '80s and even more so in the Clinton-era, with scores of them packed like sardines into indie record store bins, and clogging up ad space in the pages of Maximum Rock n' Roll.  This particular comp (evidently without an actual title) came out in late 2012 on the upstart Zoo & a Movie label, and being it's the only various artists 45 that I know of to date in this decade (heck, maybe even the last one too), it's something of an outlier.  As for the artists and tracks comprising it, this record strikes me as a bit random, albeit loosely stitched together with a concomitant lo-fi thread.  Bit of a regional bent here as well with the participants hailing from San Fran, Charleston, SC, and Louisville. 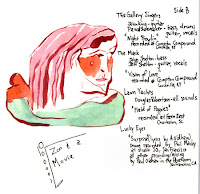 Gnome Wrecker/Dwarf Corpse (guess they couldn't settle on either monikers) commence "Still Asleep" with a spicy guitar lead before settling into something a bit more demure, complimenting their hushed vocal fixation.  Frisco's co-ed Lucky Eyes, the only entity to appear twice on this record, are by default the most consistent contributors, with fervent power-chord rave-ups, and an overarching panache that vaguely resembles latter-era X.  The Party Girls' "If 6 Was 6" tinkers with a dissonant minor-chord lick that stays lovingly etched in your noggin' for at least an hour or town after encountering it.  The Mack (featuring Louisville's John and Jeff Shelton) take us on a lovelorn acoustic jaunt, sporting what sounds to be an upright bass.  Saving the best for (almost) last Lawn Yachts (aka Douglas Robertson) dish out a scalding slice of feedbacky noise-pop, "Field of Poppies." that would do the likes of early Sebadoh more than proud.  Hope there's more were this came from.

The record is available directly from Zoo & a Movie.  I'm offering two songs from it below.  If you like what you hear please support the bands!

Well... I've got plenty of compilation 7"-ers from the past few years or so (mostly pop-punk ones like "Dangerous Intersections" and Dead Broke Rekerds and stuff, but also the "Bloodstains Across" series on Mammoth Cave which is pretty great), but I know what you're saying. I see more split cassettes than I see comp 7"-ers these days.

"Download not available
This file is marked as illegal. (a7bc2095)"

Right now, no downloads are active active period. Keep checking the blog for updates. Thanks.