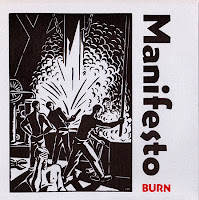 You probably wouldn't guess it from either side of this wax, but Manifesto frontman Michael Hampton was bandmates with a pre-Black Flag Henry Rollins in State of Alert, and later in Void.  A little later in the mid-80s he teamed with Ian MacKaye as the guitarist for seminal post-hardcore pioneers Embrace.  As if that wasn't an impressive enough pedigree, after his stint in that reluctant emo set, Hampton promptly graduated to One Last Wish in 1986, joining Brendan Canty and Guy Picciotto, later of Fugazi.  As for the band in question, Manifesto were an entirely different kettle of fish, trading in post-hardcore for a modus operandi that barely registered as post-punk.  Impeccably tight and sonically bold, the trio vaguely delves into the loftiness of Night Time-era Killing Joke on "Burn," while "Long Time" strikes a more lucid tone and plays to Hampton's melodic strengths.  Manifesto signed to Atlantic in the throes of Seattle-mania, and released an unremarkably colorless album in 1992 that I recall really, really detesting at the time.  After enjoying this 45 to fairly large extent, I'm tempted to retrace my steps.

A. Burn
B. Long Time

Unfortunately, I don't think you'll change your mind about the album. I listened to it again recently; it hasn't improved with age.

Hey CG. You know, that's exactly what I was afraid of. Let's give it another two decades : )

Personally, I quite like the album - I think it's a good example of British jangle pop, even if it's not actually British. But I can see detesting it given Hampton's pedigree, especially after that frequently amazing Embrace album. Though I'd argue his guitar work with them pointed the way to this direction.

Saw them around DC several times back in the day. They had a fantastic live sound that never came across on their records.