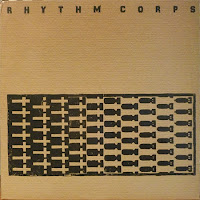 I was reintroduced to the Rhythm Corps (formally Rhythm Method) two years ago when I caught the original 1982 version of "Solidarity" on a college radio program.  I quickly sought out the record it was derived from, Paquet de Cinq, and dedicated some space to it last year.  It barely sounded like the work of the same band that found a modicum of mainstream success in the late '80s, who by that stage had undergone quite the sonic overhaul.  Filling the gap between Paquet and the the Common Ground album cut for Columbia in 1988, came another ep, Esprit de Corps.  I resisted Esprit... upon first blush, but despite Rhythm Corps deeper embrace of slick, Reagan-era studio finesse the songs comprising the ep eventually began to stick (although I'll probably always regard them as inferior to more poignant, solid-gold nuggets like "Broken Haloes").  I've given you the opportunity to make up your own mind below, and conveniently bundled with it is an alternate rip of Paquet de Cinq, taken from a cleaner vinyl copy.  Click on the hyperlink above for my original spiel on that disk.

I grew up in outer Detroit area and saw Rhythm Corp at an MSU event back in 82 or 83. loved them since.

Any chance of a reupload of this and Paquet de Cinq?

Hate to ask, but...any chance of another reupload of this and Paquet de Cinq?

I still have all their stuff. drop me a line at youdummy@gmail.com if needed