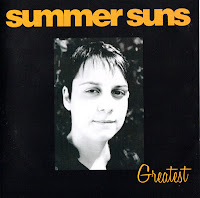 Well, the whole Rapidshare mess remains thoroughly unresolved, so in the meantime all future entries will direct you to a d/l link with an alternate file hoster.  In short, any link with a netkups addy should still work.

It's difficult to say who among the throngs of talented indie guitar-pop outfits that called Perth, Australia home in the mid-80s onward was "king" so to speak.  Take your pick - DM3, Stems, Triffids, Early Hours, and Marigolds amongst the most preeminent of the bunch.   As luck would have it, Dom Mariani who headed the first two of that lot I just rattled off, hooked up with Kim Williams (formally of the Holy Rollers) for what was to be a brief one-off recording session in '86 that ultimately yielded a new life force of it's own in the shape of the Summer Suns.  Mariani, having had his day in the Sun, left the band not long after they had gestated, leaving Williams as CEO.  Once referred to as a "revolving door for Western Australia's premiere pop musicians" due to ever shifting lineups, the Suns shined more resplendent jangle than garage-addled angst, and I wouldn't have done it the other way around.  Right up until the mid-90s, Williams and Co. recorded for such iconic indie imprints as we Get Hip, Bus Stop, Parasol and Waterfront, leaving behind an album, two eps and roughly a half-dozen singles.  Greatest, as it's title capably implies, is a creme de la creme compendium, entailing roughly 60-70% of the Summer Suns discography.  Limited to a CD pressing of 1000 copies, it quickly sold out a few years ago, but fear not, it's available here and now, ready to regale you with such diamonds as "She Understands," "Brighter Than the Sun," and "Ash and Cinders."

Thanks for posting this album! It is a really strong collection & has inspired me to buy the CD from the band via discogs:

That's what we're here for. Thanks Michael.

Great to see you up and running after all your Rapid.......hastle,
Great music as always!!
Niall

I get the same message as the Troggs tribute

Any chance this could be re-upped...message says it's been deleted due to inactivity. I just heard one of the band's songs and they sound phenomenal. Thanks!

Kindly re up this one pleaseeee.....thank you in advance..

Hi there. Same as a few other people have requested, could this be re-upped please ? Heard a few tracks recently and investigation led me here ......