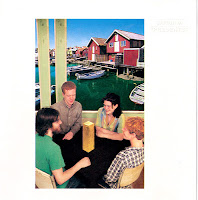 Another Zeppelin album cover parody?  Guess it would be kind of hard to convince you it was a mere coincidence, huh?  Been meaning to share this one for awhile though.  Where do I start, let's see.  I'll give away the conclusion before I get into any specifics.  Were Sardina's Presents to come bursting out of the starting gate today, donning a Merge or Sub Pop logo on the back sleeve, the indie cognoscenti would be revering them just as much as the Arcade Fire and Iron and Wine.  Spearheaded by one Michelle Marchesseault with three capable gents in tow (all of whom pitch in with the songwriting), this unheralded Indianapolis quartet eschewed any of the requisite "chick-rock" connotations of their era, which is an accomplishment unto itself.  In fact, Presents doesn't feel indigenous to the '90s in virtually any capacity, bearing a fresh, almost surreal sonic tapestry at times.  The commencing "Ding Dong, the Liberty Horse" melds sing-songy verses with bendy, tremolo inflected guitar lines, infusing it's stunning three minutes with an addictive sway.  On the same "pop" continuum, "Liberty Horse" is quickly followed up by the equally winsome "I'll Be Around," and elsewhere on Presents first half, Sardina tinker with Pixies-esque juxtapositions on "Cockadoodledoo" and "Pickled Frogs" to mixed effect.  Marchesseault exudes her inner torchbearer on the strikingly lucid "Hey," proclaiming, "I'm all about your trouble, I'm all about your pain," with melodic, wrenching conviction.  Following suit are a bevy of chilled-out numbers that occasionally suggest what Edie Brickell might have accomplished had she taken the alt-rock bull by the horns after that annoying one-hit-wonder of hers faded away.  My words really don't do this disk justice, so you know what to do next.  For a bit more text, which btw mentions the 2008 passing of drummer Lonpaul Ellrich, check out this piece from Balkans via Bohemia.

Sardina's biographical details are best outlined on their Indiana Music Archive site, and even more rewarding (that is if you take to this album), a robust selection of live shows and unreleased studio tracks can be enjoyed here.

It has been requested that I remove the link.  Sorry.
Posted by spavid at 7:31 PM

Jeepers creepers, that write-up has me anticipating tremendously the chance to hear this disk. I will weigh in later with my usual "insightful" comments.

By the way, that Indiana Music archive site is just amazing and something that every state or locality that thinks it has a "scene" ought to try to emulate.

But my guess is that it's places that are a little bit out of the mainstream that would be more receptive to a site like that.

Anyway, thanks for the tip on this band.

Hey Ace. Yeah, I thought the exact same thing when I first checked out the Indiana Music archive as well. For bigger states like Cali and New York it might get a little out of control, but what a treasure trove that would be! Hope you enjoy.

It's an amazing album, and they were awesome live!