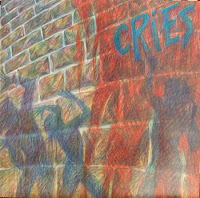 From what I understand, Cries owned and/or operated the Water Music recording studio in Hoboken, NJ.  A series of bands who recorded there in the '80s contributed songs to the Water Music Compilation Album (featuring among others the dB's, The Wind, and Let's Active's Faye Hunter), which I shared in it's entirety a few years ago.  At the time this 1983 ep was tracked however, that recording studio must not have been in existence, as Between the Bricks is credited to being cut at New York's renown A&R Studios.  This might explain this disk's rather pronounced sheen, which cues in on the Cries doling out highly competent songs skirting the periphery of new wave and power pop, with more than a nod and a wink to mainstream FM outlets where the trio ostensibly hoped to gain a foothold.  "Death in Boston" is indelibly tuneful from moment one, benefiting from soothing harmonies and a pulsing synth line.  "Goodbye is a Sure Thing" is slicker, resembling period Jackson Browne but just as enjoyable, with the concluding "She is Her Own Spirit" complying to a similar formula.  Other than the ep in question, and a song they contributed to the aforementioned Water Music comp, I'm not sure if this was all that Cries had to their credit.  A pretty minimal discography is you ask me.  You can see bigger, clearer scans of both sides of the record sleeve here, including some very charitable liner notes on the back.

Nice one. I bought this about a year ago. Interesting stuff.

You have great taste.

Hello, could you re-up this album please? Thank you.