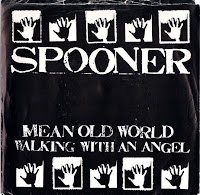 Once upon a time there was a Wisconsinite named Butch who produced many hit records, including one called Nevermind from 1991 that a handful of you may be familiar with.  Unfortunately, later that decade, Butch found it fit to mire himself in copious amounts of Garbage.  While that left some of us wondering if he'd sacrificed his credibility, it would eventually be revealed to yours truly that prior to all the mega-bucks hoopla, Butch had festooned himself to a drum stool in the 1980's in two genuinely earnest, jangle-laden power-pop bands, Spooner, and shortly thereafter Fire Town.  This single was preceded by two other ones, and more substantially a pair of full lengths, Every Corner Dance (1982) and Wildest Dreams (1985).  The two tracks here sound nearly inseparable from the work of Fire Town, who Butch and Spooner frontman Doug Erikson graduated to immediately thereafter.  The Spooner/FT formula was a simple but effective one, and I might add hardly evocative of the more bludgeoning grunge/punk/metal/alt productions their drummer would eventually help bring to fruition.  Plenty more Spooner is available for the taking at Power Pop Criminals, while Fire Town's two LP catalog was reissued a few years ago (In the Heart of the Heart Country is essential)!

A. Mean Old World
B. Walking With an Angel