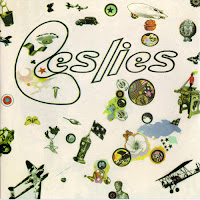 Yep, that's a Led Zeppelin album parody you're looking at kid, only this record is a 45, and there's no rotating panorama thingy inside the cover.  The Leslies were a fairly sublime guitar-pop combo that issued a handful of albums in the mid-to-late '90s.  The purpose of this record was to introduce the band to an American audience, albeit at a micro level.  Per the sleeve notes on the back, the four songs were taken from four different phases of the band's career.  Featured are selections from their albums Totally Brilliant and Of Today - For Today, as well as a cover of Marshall Crenshaw's superlative "Favorite Waste of Time," which was only otherwise available on the Japanese version of Brilliant. The Leslies tended to skew more in the direction of American acts like Greenberry Woods and the Posies, than ones residing on their home turf.  I think I recall reading somewhere that American Pop Project intended to put out some of their albums in the States, but that apparently didn't come to fruition.  At any rate, enjoy this.

Been trying to snag this off you for some time, but couldn't due to RS woes. I knew it wasn't your fault. Who would do a blog of obscure music and then access it only to himself? You asked for this, so I will answer. All's smooth (finally) with the RS links (for now). Thanks for letting me get this EP back into my music library. It was very much missed.

Who would do a blog?
You asked for this, so I will answer. http://theblackenedair.blogspot.com

Any chance of re-upping this?