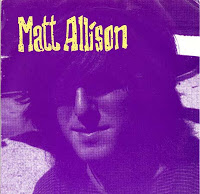 A shame this jewel didn't appear on my radar 23 years ago when it was initially issued, but I still have the rest of my life, right?  Simply put, what I had been missing out on over the intervening decades were two prime cuts of the most resplendent jangle pop that I'm convinced I'll ever hear.  While I have precious few details to offer on Matt Allison himself, the a-side "Hard Look at Perfect" finds the man in question aided and abetted by none other than two gentleman who've put more than a sizable stamp on the genre, Paul Chastain and Rik Menck of Velvet Crush renown.  "Hard Look..." is carried aloft on the wings of tingly, hard-strummed chords (most likely emanating from a Rickenbacker) slamming head-on into a delirious wall of melody.  Though "Hard Look..." is the superior cut here, the more subdued "Heyday" mines a vein that's not greatly removed, only Matt is all by his lonesome on this one.  For what it's worth, this probably ranks as one of the best fifty singles in my collection.  Another great call from the Bus Stop label.

A. Hard Look at Perfect
B. Heyday

Matt Allison went on to become a fairly successful punk producer -- Alkaline Trio, Lawrence Arms. He still has a studio in Chicago.

Thanks for this one - new to me! - anything else with velvet crush alumni?

I knew the name sounded familiar. I've been known to listen to Alkaline Trio once in awhile.

Johnny, you may want to check out this previous post:

The Pastor Of Muppets!!!

Got this back in early 90. Still amazing!

On first listen, I was "yeah, that's ok, all the right pieces in place," but after more listens I REALLY love the A-side. Awesome. Thanks for making it available.

Easily in my top 10 singles of all time.

link seems to be down - any chance of a reup? Would love to hear this. Thank you

still hope that a new link for Matt Allison can be made available. Would really love to hear this one. Don't mean to pester you, I was surprized RS deleted it so quickly. I appreciate all your wonderful shares.

I just repaired the link folks. Thanks for alerting me.