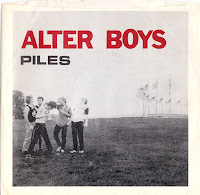 Last summer one of my readers suggested an album by New York's Alter Boys dubbed, Soul Desire.  I did a little homework on the Boys and subsequently mailordered a reasonably priced used copy of Desire, and later shared it on these pages (linked above).  While I patiently awaited it 's arrival, I discovered that I already had a song from an earlier A/B single sitting on my hard drive, specifically the scintillating A-side to the wax I'm posting today.  Utterly stupefied.   Love at first listen.  "Piles'" raw, unremitting surge of jangly, screaming guitars could have been misplaced as the outtake of my dreams dreams from the Replacements Let It Be - that or U2 gone very weird.  In fact, I'd bet Bob Stinson himself could have whipped up a sonic cocktail of this magnitude circa '84 (though frontman J.D, Barrell was a far cry from Paul Westerberg).  Dazzling as the energy exuding from "Piles" was, it's angsty, misanthropic motif would have sounded downright clumsy had it been read straight off the piece of paper it was likely penned on, but in the context of the song the prose works just fine. The two flip-sides (one being an instrumental) were a different story entirely, though the bratty "Gimme What I Want" foreshadowed the more linear tact the Alter Boys would make as the rule, not the exception on Soul Desire. Whether "Piles" was a happy accident or not, I'm more than grateful to have this anomaly grace my ears whenever I hear it.

Not long after excavating said song and the Soul Desire LP, I came into possession of an undated, A/B demo tape, which might as well have been a one in a million find, because among it's four tracks was an early incarnation of, you guessed it, "Piles."  The single version is superior, though the lyrics are more discernible on the demo.  The remaining tracks on the tape don't outshine the "centerpiece," but in toto are more consistent than the single.  Perhaps I'll have more Alter Boys to share in the offing...

Love you is great