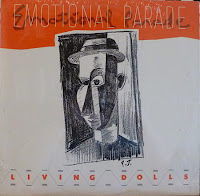 We have another cold case on our hands, this one coming from Seattle as it would appear.  The Anglo-worshiping Living Dolls just barely make the leap to the left end of the dial, but if you can look past the "crossover potential," that ostensibly failed to materialize, this record showcases four highly satisfying tunes.  The pumped-up synths permeating "Bury the Bottle" lend a new romantic vibe to what is probably the catchiest thing on here, while the remainder of Parade takes on a more organic essence.  Pretty much anywhere the needle drops on Emotional Parade has me jonesing for the likes of Wire Train, Then Jerico, Ups and Downs, Railway Children, even the Ocean Blue at moments.  Indeed, this is that kind of record and the Living Dolls are that kind of band - and you're likely to either love 'em or hate 'em.  Hopefully there's a lot more of the former among you.

Please contact me at trout60@yahoo.com. I was the lead singer, guitar player and songwriter for this stuff, way back when....thanks.

I saw them play at the Central and again at Ditto, great sound, talked to DA Fish after and asked about "Life in paradise" which had AirPlay on KJET but wasn't on their LP, he said we never pressed that...shame. Still wanting to hear it again

Could you please re-up this? Thanks a lot.

I saw you perform at the Hollywood Underground in The U District. Discovered y'all on KJET. So Great!!