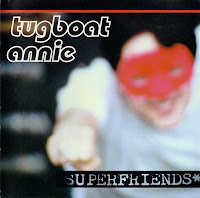 My share of the WBNY Alive on Air compilation from a few nights ago had me reminiscing about many of the bands on there, not the least of which, Tugboat Annie.  Nationally, the Goo Goo Dolls may have been epitomized as the band Buffalo, NY laid claim to, but for the locals who had first-hand knowledge and exposure to the talent bubbling under in the Queen City, Tugboat Annie were usually at the top of everybody's list.  They were perched upon mine at any rate.  Kickstarting their career in the early '90s, TA's fuzzy, buzzy guitar crunch negotiated a vigorous balance between pop and punk over the course of several demos and a handful of singles, including a split 7" with brothers-in-arms milf that I offered up several moons ago.

By the time album numero uno, Superfriends dropped in 1995, local followers had been long acquainted with the material within by virtue of dozens of live gigs, often transpiring at Tugboat Annie's live-in loft/practice space in downtown Buffalo.  Moreover, by this time the quartet had shaken off their wet-behind-the-ears mire, adopting a demonstrably more mature and earnest modus operandi with significant attention paid to texture and dynamics - plenty of the latter I might stress, a la Nirvana and the Pixies.  Though I'm certain it wasn't their intention, Superfriends didn't do Tugboat quite as much justice as their live performances.  That being said the most gratifying selections here are nothing short of stunning, with "Only," "You Want it to Be Bad" and "Adaptor" standing out in particular.  What was TA's secret weapon you might ask?  The long and short of it comes down to frontman Mike Bethmann whose mildly raspy pipes emitted hooks to die for.  The best part?  As promising as Superfriends often is/was, it hardly hints at the sonic quantum leap Tugboat Annie would make after bringing guitarist Jay Celeste aboard (and relocating to Boston) for three vastly improved and invigorating releases - Wake up and Disappear, Separation Songs, and The Space Around You, all of which were minted for Big Top Records and well worth checking out.

Love this album! Thanks for spreading the word!

Very nice. Thanks for sharing! Do you happen to have their ep to share?

Awesome. Remember growing up see TA at nietches. The brings me back.

Great album, any chance you can repost the RAR file? Lost my CD from years ago and having a tough time finding a copy...