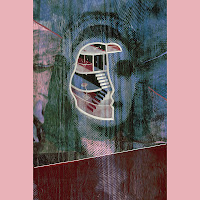 I wanted to give everybody a heads up on the extremely limited cassette release of the latest Kent State (as in the band, not the university) product, the Behind Closed Doors ep, the physical version of which is limited to a mere fifty copies.  Rok Lok Records is selling it here, but act fast!

The centerpiece (title cut, duh) is a bruising, raunchy maelstrom drizzled in big chunky glops of scuzz guitar, with one foot firmly in the garage, the other fixing to bolt to the shoegazer dystopia of your wildest fever dream.  Up next, the punkish thrust of "Disconnected" is aided and abetted via the collaborative efforts of Airlooms.  And if you ask me, it's a real bitch that "Formaldehyde" and the uber-woozy "Time Crimes II" clock in at just over a minute apiece, given that each of these fleeting experiments are equally as engaging as "Behind Closed Doors."  I've likened Kent State to Swervedriver in at least one past critique, and that band's gauzier, bendier elements infiltrate the proceedings here, but this crew also rip a few threads from the decidedly rawer sonic tapestry of contemporaries Waaves and Cloud Nothings.  But don't take my word for it - check out the video for "Closed Doors" below, and if tapes aren't your deal, head over to Bandcamp for your digital fix.

Thanks for the write up! I appreciate it.