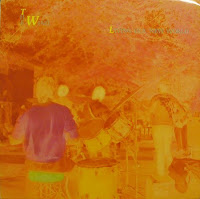 The Miami based Wind's debut album, Where It's At With the Wind, from 1982 has long been regarded as a low-key power pop classic amongst such tastemakers as Jordan Oakes and Kurt Loder (the latter of the two happening upon the trio in a New York City elevator shortly after it's release). The Wind sadly failed to make any commercial headway and burned out in the mid-80s, eventually launching singer/guitarist Lane Steinberg's, follow-up act, Tan Sleeve, but not before releasing this second album in 1986 on the New York indie imprint Midnight Records.


Where It's At... was utterly red, white, and Mersey all over, with the early Fab Four being heavily employed as the template, but by the time they got around to Living in a New World, their Brit Invasion punch was spiked with the fresher, stateside leanings of the dB's and the Bongos. Dare I say this is the superior record? Sure I do, and with sprite jangle treasures such as "Something Tells Me," and "Happy to Know Her," who could argue with me? On a more frustrating note, when I bought this disk, I didn't know that the best song here, "Wake Up" had some rather pronounced scratches indelibly etched into the wax. If I come across a cleaner copy, I will gladly do a re-rip. BTW, one of the Wind's other finest moments was a track called "House On Fire," that came out on a 1984 ep, Guest of the Staphs. That ep and Where It at... were released in unison in 2002 on CD courtesy of Jordan Oake's Yellow Pills label. Additionally, Where It's at... was reissued this year on vinyl.

I'm very happy to have your rip, scratches and all. I've looked for my own copy of this for many years, but haven't had any luck so far. I've loved the first album and EP since I found them together in a used bin 20+ years ago. Thanks very much.

Glad you enjoyed it Eric!

I too thank you for ripping from vinyl so I don't have too. Do you have the first Noel Coward's Ghost? I never got that one.

Hey! If you have time, a re-upload of this link would be MUCH appreciated! I'd love to have a digital copy!

The link has just been updated. Thanks for alerting us.

Thanks for this re-up. This is really a great, great album. I lent this out a long, long time ago and we all know how that tale ends... and for all those who are interested, pop over and say hi to Angelo at Power Pop Criminals, who just re-upped the also elusive work of The Wind, "Guest of the Staphs."

As a member of The Wind from 1984-1988, I can say that Living in a New World was an insanely fun album to record. Lane Steinberg and Steve Katz remain two of my favorite songwriters on the planet. I'm happy that the reviewer loved Living in a New World but feel that a comparison with the first album is difficult to impossible, given the vast stylistic differences. (There is unreleased material in the form of a 4-song EP, recorded in late 1987, which may well represent the band's finest moments in the studio.) It's really cool to see that people still listen to the music! ��

Just found this re-up! Thanks for posting!

Hi again, it seems I found another gem in your blog, and unfortunately the link has expired. Dont know how I missed this one since I havebeen following your blog for a long time now. Would it be possible to re-up, please?

A lost classic. Is there a better anti-patriotism tune than "Apricot Drive"? I've loved this album for 30 years. Thanks for making it digitally available.