Splitting the Difference # 26 - The Gwens/Breezy Porticos (2001, Happy Happy Birthday to Me) 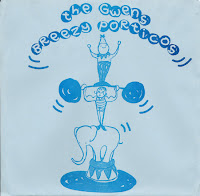 First off, I apologize for all the pesky snaps and pop, but hey, we're talking about vinyl here - and very limited wax at that. 500 copies. Sold out from my understanding, making it a prime candidate for a Wilfully Obscure redux. Denver indie kids Breezy Porticos were my incentive here, especially after falling in love with their Keep It Crisp CD from 2005. Dare I refer to them as "post-twee?" Probably the most accurate genre-fication I can come up with, vaguely recalling Poole, Small Factory, and of Montreal. Two exclusive cuts here. The latest and greatest from the Porticos, These Record Highs can be obtained here. Check out the press section of their website for further enlightenment.


Regarding The Gwens, the band they share this split with, my firsthand knowledge is sorely lacking, but I was able to locate an online discography for them. Not a bad pairing with the Porticos, but the Gwens are a little more distortion savvy, a la the Wrens. Am assuming they are defunct, but they did release an album that is still available from Insound.
Breezy Porticos
01. Gee Your Math Looks Great
02. Breaking Away
The Gwens
01. Skin 'n Bones
02. Chemical Man

Can you re-upload this please?