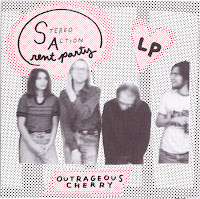 Outrageous Cherry are a superlative, retro-fitted psyche-pop revival band, hailing from the Detroit, MI area. They've been kicking around since the early '90s and have most recently released their ninth album, Universal Malcontents. Check out their Myspace page for a full discography. One of their finest moments is actually an all covers affair, Stereo Action Rent Party, which I am presenting here in it's entirety. Released in a limited edition of 2000 copies in '96, the album was a super huge treat for O/C fans, but you didn't necessarily need an appreciation of them, so much as the myriad of bygone artists they pay tribute to including: The Smiths, Brian Eno, The Beach Boys, 10CC. Television, Leonard Cohen, Scott Walker, and Petula Clark. Classy taste to say the very least. As Allmusic so accurately points out:


By not including any list of who recorded the original versions anywhere inside the CD booklet, the group makes each song completely their own.


A great orchestral bent to a couple of tunes here, including their rendition of Petula Clark's "Sign of the Times," which pretty much outdoes the original. Can't necessarily heap the same praise on some of the selections that follow it, but Outrageous Cherry nevertheless do adequate justice to everything they revisit here. Enjoy.
01. Sign of the Times
02. Days
03. Qui Peut Dire?
04. Song from the Bottom of a Well
05. Wonderful
06. Boy Child
07. I’m Not in Love
08. Chinese White
09. Miss X
10. Ring Around the Moon
11. Reel Around the Fountain
12. Some of Them Are Old
13. Lonesome Heroes
14. Make the World Go Away
https://www90.zippyshare.com/v/Vtzuzr4V/file.html
Posted by spavid at 8:36 PM

i will be downloading this as soon as my other rapidshare download is done. i passed on this a few years ago at a record store. my mistake. turns out its the hardest OC to get now. thanks a bunch for it.

I usually listen loud music in my house, that´s why I bought a big stereo, I like to spend my time at home I think it was the costa rica investment opportunities because I acquired my house and now I can do everything I want.

wondeful!!!this whole information is absolutely useful and interesting. i like this blog because is easily understandable, and that is invaluable to the readers. I wanted to buy viagra online, and i saw this blog. I think this information will be useful for me specially because I want to get a great stereo and take advantage about it.

Any chance of reuploading this?

could you please reupload this album or email over a link ? would be really appreciated