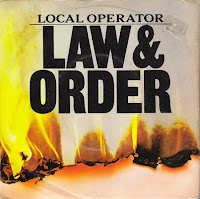 Last January, I posted the sophomore album, The House of Love, by a late'70s/early '80s British post-punk act called Jo Broadbery and the Standouts. Only thing was, that "second" album was actually the first legitimate Broadbery/Standouts record, while the previous disk, Jo Broadbery and the Standouts, was originally issued as Pushing Out the Poets by his full-fledged band Local Operator. In that post, I delved into the possibilities as to what prompted the name change, which you can view at the House of Love hyperlink above. 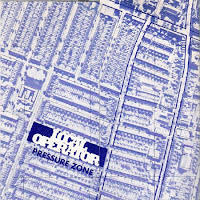 Before Local Operator's Pushing Out the Poets hit the shelves, two singles were released on Virgin Records. While the LP is a little taughter and focused, the four tracks spread across these sharply dressed 45s provide ample evidence of Broadbery's seamless fusion of Elvis Costello's classy, poignant songcraft with the demi-reggae leanings of The Clash. Case in point, the song "Law and Order," which wouldn't sound out of place played in between Joe Strummer and Co's "Pressure Drop" and "Police and Thieves." Speaking of Clash songs, the theme running through L/O's "Law and Order" is a hell of a lot more gripping than breaking rocks on a hot day. "Pressure Zone" from the other single (which features a neat fold-out sleeve) is incessently catchy as well. I'm also including a live version of "Law and Order" from a relatively obscure British comp, The Moonlight Tapes, in which Jo Broadbery sets the table by laying into prime-minister-to-be, Margaret Thatcher. If you like what you hear, download the first Local Operator/Jo Broadbery and the Standouts album here.

1st single
A. Pressure Zone
B. The Untouchables

In 1979 Local Operator had a residency at the Moonlight Club in West Hampstead, on every Thursday (or Wednesday?) night for a month. One of my bands, Bongo Express, supported them for the first and third gigs; For the second gig the support band was U2, playing either their first or second gig in the UK, and on the last Thursday the support band was The Cure, probably playing their first gig in London. I was at both the U2 and Cure gigs and the general feeling was that The Cure were interesting but that U2 were dated and, with their mullet haircuts, doomed to obscurity.
Local Operator also had a residency at the Hope & Anchor in Islington where another band I was involved with, Self Control, supported them. Suggsy from Madness was always in the crowd as he was a big fan. He was always trying to interest us all in his band Madness who were just starting to play in the pubs around Camden. I think I was the only one of us who went along to see them. Realised straight away that they were going to be huge.
Shortly after the Moonlight Club gigs Virgin dropped Local Operator I suspect because of poor record sales. They had a farewell gig at The Nashville, and Bongo Express again provided the support.
Jo Broadbury was Irish by the way, and a very good guy. I was mainly friends with their guitarist Geoff Cooper, who moved to Milton Keynes towards the end of the 80's. I was sitting in his flat in Holland Park one day watching the snooker when we heard the explosions from when the SAS stormed the Iranian Embassy. Happy days.
James Dutton

Found this on a U2 website:
1979-12-01 - West Hampstead, England - Moonlight Club (6 songs).
The post doesn't mention that they were supporting Local Operator.

Am now confused, as the U2 site says the 1st December U2 gig was supporting the Dolly Mixtures. So either my memory has failed me (I did see the Dolly Mixtures at the Moonlight Club) or there's either a mistake or a missing gig on the U2 site. Can anyone help? Geoff Cooper, where are you?! http://www.u2gigs.com/Early_Days.html

Hello. Thanks for the post. Jo Broadbery was my dead. He remains an enigma to me. And reading this has made me very happy, and provided some clarity...Dusty

you were right that U2 supported The Standouts...Heres a flyer I found, showing U2 supporting Local Operator at Dingwalds...http://www.u2theearlydayz.com/14121979-dingwalls-camden.html

The comments here are amazing (and insightful). "Pushing Out The Poets" has always kind of been that sort of illusive beast that I've questioned whether or not it even actually existed because I'd never seen it, or even been able to find anyone that had it, heard of it or knew anything about it. I did eventually find out that it was simply rereleased under Jo's name. Still one of those records that always gets me every time I hear those songs. Thanks for the posts & cheers !

It´s funny how the memory plays tricks. I remember U2 supporting someone - it must have been the Dolly Mixtures, as I saw them at least once the the Moonlight Club. That would be one of the Dec 1979 gigs I guess.
They clearly had something because I still remember them on stage, but we London hipsters (ish) thought they were a bit old fashioned, with the haircuts, and a bit posy, in that they were more trad-rock-band style on stage rather than the anti-hero punk style of the last couple of years. Bono did have some charisma of course, even at that age.
The Dolly Mixtures were fun. I must see if they´re on Spotify....

U2 seemed to completely lose it after Joshua Tree (and some would say a few years before that). If only everything they did after that album didn't sound so damned forced. Try as they might they'll never get the magic back.