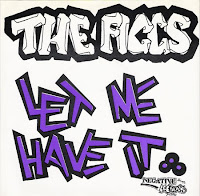 Coffin Break and The Figgs are something of an unlikely combo for a split single, in regards to both genre and proximity. Granted, "Let Me Have It," cut in 1992, presumably for the Ginger sessions finds the (then) upstate New York quartet raising a little more of a raucous then usual. The jagged little squelch of feedback in the opening seconds leads into a treble-happy, two-and-a-half minute slice of pogo-pop as only the Figgs know how to cook up. Of course, I've extolled on them a few times on these pages, so I'm a little biased. 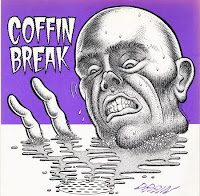 Truth be told, at the time of this release Seattle's Coffin Break were also of significant interest to me. Their side, featuring "Drain" is a taught exercise in thrashy punk rawk with a vague metal tinge to drive the point home. Concise and punchy as-all-get-out, but a trifle too amelodic for all you "pop fanatics" I might add.
A. Coffin Break - Drain
B. The Figgs - Let Me Have It
http://www80.zippyshare.com/v/PBo5Wdu2/file.html
Posted by spavid at 5:19 PM