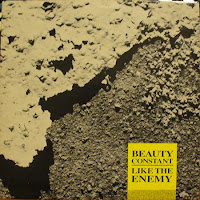 As long as I keep unearthing vintage gold like this smashingly impressive platter from Beauty Constant, this blog will continue to occupy it's little slice of cyberspace. Found this one at the always-worth-the-trip Jerry's Records in Pittsburgh a few months ago. Right from the starting gate, the opener "Ed's Anthem" sounds as vital and visceral as anything on say, the Lemonhead's Lovey, or the Nils self-titled album. Just plain absolutely killer indie-guitar rock, with a totally riveting hook. And while the rest of Like the Enemy can't quite muster as much instant gratification, there are several moments that that come damn close. Too bad there were no promo inserts to accompany my copy of Like the Enemy, but via a quick Google search, I learned that bassist Sandy Smallens eventually went onto (slightly) bigger things in Too Much Joy. Really appreciate Chihoe Hanh and Steve Folta's guitar chops here, approximating a mixture of Bob Mould and Peter Buck. More recently, it appears Folta has recorded music under his own name, which you can download here. Enemy is a really cool left-of-the-dial find, with some sharp Rickenbacker bite from the sounds of things. If anyone can shed any more light on Beauty Constant don't be a stranger.

Great blog, never seen it before but will follow it from now on! I think Beauty Constant was a Yale band, Sandy was there at that time I believe. I'm a big TMJ fan but have never heard this stuff, downloading it now. If you would like to track the lineage of this music further, search for another obscure power pop band in the same vein, Monobrau, they were the next Yale band to take over this tradition and they were great, would love to find their music again, used to have a cassette but long gone now. They then inspired Earl's Comfort Station, my band from 1993-5, we have a disc called Revolver. Our frontman, Django Haskins, has gone on to lots of critical success as a solo act, in International Orange and most recently Old Ceremony, I highly recommend them. Lastly, Leckerphonics, my current outfit, carries on in the power pop tradition, we are on itunes and Amazon and full tunes can be heard on our FB page; I can kick you a link or gift you a few tunes if you like.

Actually our disc was called Revolvo, you'd think I'd remember. Revlover was by somebody else called the Beatles or something. Never heard it, it is pretty hard to find...

Thanks for the info Bachus, and I'll check out the Leckerphonics, and wouldn't mind hearing Earl's Comfort Sation either. Wasn't someone from Ben Folds Five in International Orange?

Yup, Bob Sledge the bass player from BF was in International Orange.

Listening to the Beauty Constant album now, you're right it's great! Going through some of your archives I'm blown away, you have tons of great stuff from my favorite bands--I see you are a Figgs fan. In New Haven we became huge Gravel Pit fans, and from there the Figgs and the Gentlemen. Heard 'em I hope?

If you want a complete record of all music recorded in the 90's then I guess you should have an Earl's disc--we were power pop, but perhaps a little too under the sway of Counting Crows when we recorded the album. If Django Haskins gets any more well known it will be a minor collector's item. Want to give me an address to send it to?

Also, if you have an itunes account tell me it and I'll send you a few Leckerphonics tunes. You can mail me off-blog at bachusd@gmail.com

Well, this is what it's all about isn't it! This blog seems to pose the question how many great bands took the R.E.M. opening and ran with it?

I've got a ton of indie stuff from that era, and on first listen I would put this up with the tops.

Thanks too to BachusD for the background.

Thank you. thank u thank u. I'm still under the shock. This one is a winner. It really made me stand up in joy.

Absolutely delighted to hear Beauty Constant. Yes, they were a Yale band: I heard them play in a courtyard among the colleges during the summer of 1985. If necessary, I could place the exact date because my friend Charles drove me to the Metro North station in time for the last train, despite the horde of Motley Crue fans that evening, so I could visit my girlfriend at the time.

I remember them playing a number of their own songs plus some R.E.M. covers, including "Green Grow the Rushes." For a college student obsessed with R.E.M., I was absolutely blown away at their covers and originals. I remember the evening well.

Charles later gave me a cassette with their songs -- I'm afraid it's in some box now, distorted from playing so many times. The songs included "Catching You," "It's One Life," "Second Minor One," "Site to See," "Thursday Night," "Send a World Apart," and "Halcyon Days." Perhaps some others too, but I never knew the names of the songs... just played them over and over.

hi can yOu please re-up beauty constant ~ like the enemy ... thank you : mic

I visited a friend at Yale in '83 and at one point we hung out in an off-campus student apartment where one of the members of Beauty Constant, Chihoe Hahn, lived. Hahn was doodling around with a Strat and as he switched pickup positions he showed me how he duplicated various guitar sounds Andy Summer from The Police. Pretty impressive.

He later became a luthier and owns Hahn Guitars.

I was told that the joke going around the colleges (Yale has 'colleges' not quads) was that Beauty Constant would come out with a new song and six months later REM would have something that sounded like it.

Pleaseeee kindly re-up...thank you in advance..

Hey man. I found a song by this amazing band and my friend, I can't stop listening. unfortunately I did not find any more of this jewel. Not even on digital platforms. could you please reup that disc? Thank you very much and a big hug from Brazil.