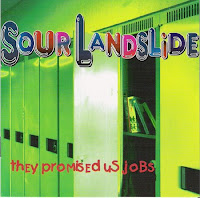 Toronto's Sour Landslide were one of many bands I discovered on a barn-burning, mid-90s compilation of Canadian bands called Popcan, perhaps a subject of investigation for a later post, but as always, I digress.


The two boy, one girl trio swiped their moniker from an REM lyric (in "Moral Kiosk" from Murmur to be exact). While their debut, Friends of Dracula utterly failed to do Sour Landslide justice, they made amends with the exponentially more satisfying They Promised Us Jobs in 1997. Akin to Shoes (the band) on a serious Nirvana kick, SL had their hooks and hearts in all the right places. Vince Nicholson's buzzing guitar salvos and melodic paeans to post-academic life, not to mention an array of romantic conundrums, dovetailed seamlessly with Landslide's crack rhythm section, occupied by bassist Vern Nicholson and skins-woman, Dee Gorvath. "Guns of Navarone," "Pop Knows a Weasel," and the more subdued "Hired Goons" are just three of fourteen exemplary selections, comprising a rather inconspicuous power-pop stunner that isn't likely to gain any further recognition - outside of Wilfully Obscure of course.
01. Human Rain Delay
02. Houdini
03. Star Search
04. Don't Call Me Stupid
05. Ghost Story
06. You Killed My Son
07. Guns of Navarone
08. Fuckin' Freak
09. Pop Knows a Weasel
10. Congradulations
11. Get To Know Me
12. Lenny
13. Hired Goons
14. Hero vs. Heroine
https://www90.zippyshare.com/v/XFSIyNZ9/file.html
Posted by spavid at 6:27 PM

If this is half as good as your description indicates, it will be a memorable find.

Wow! I can't believe I missed out on these guys until now. Thanks!

Well, I have now listened to the first three tracks, and I am very pleased. The first one (Human Rain Delay) is fantastic. I am always amazed when I find out about more great music.

Let's see if the rest of the album holds up.

Thanks for the kind words, please check out the newest band for Dee and myself at http://www.myspace.com/thebenvereens

I know I have/had this somewhere, but I can't find it. So, if you could re-up it would be hugely appreciated. Been thinking about that song "Ghost Story" which (if it's the one I'm pretty sure it is) is a really amazing track.

Thanks. (And OK if it's too much of a hassle to re-up, as I KNOW I have it somewhere, probably misfiled.)

UPDATE: No need to re-up for me. I was so obsessed by my need to hear "Ghost Story" that I dug through my "archives" and found where I had (in)conveniently put this recording.

I have very much enjoyed re-visiting their record. Singer quite resembles one of the guys in The Shoes.

In what appears to be an annual occurrence I seem to have (again) lost my copy of this recording. So, if you can re-up it, that would be appreciated (or if you want to tell me not to be so sloppy with my filing, that would be understood).

Does anyone have a copy of "Friends of Dracula"? Had this record 20 years ago and would really love to hear it again!

I think I still have a copy of Friends... Will try to get it up soon.

That'd be great, thanks! :) I've been looking for that one for a long time!

Friends of Dracula was fantastic. Always loved playing with you guys - Rosewafd Foundation.

Friends of Dracula was fantastic. Always loved playing with you guys - Rosewafd Foundation.

I know I'm more than a decade late, but would there be any possibility of you uploading the Popcan compilation CD if you still have it?