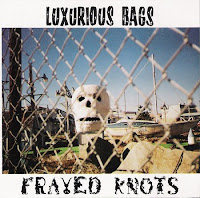 With the rapid dissolution of independent (and even some chain) record stores, not only are discophiles like yours truly left with fewer places to buy tangible recordings, we're also left with fewer places to be exposed to music. Case in point is the Luxurious Bag's excellent mini-album, Frayed Knots. This band would have remained unbeknownst to me, at least indefinitely, had I not heard this cd played in-store at Reckless Records in Chicago a few years ago. Something tells me this experience wouldn't be duplicated at say, FYE or a big box retailer. In-store play sells records - always has, always will...that is until there's no more stores...


Before approaching Frayed Knots, it would be to your benefit to be acclimated with Polvo. While the Luxurious Bags don't share any affiliation with the Chapel Hill quartet, they take more than a couple pages from Polvo's chord-mangling indie-rawk days of yore, particularly their earlier releases like 1993's gloriously dissonant, Todays Active Lifestyles. The Bags slide the lo-fi quotient up a few notches, while carrying a tune at the same time. Furthermore, the songwriting occasionally strikes an emphatic tenor here, a move that's an anathema to most noiseniks.


The Luxurious Bags earlier recordings, collected on Quarantine Heaven were a largely in one ear, out the other proposition, leaving Frayed Knots as the band's most essential offering.
01. All the Time in the World
02. Movie Mind
03. Woolite
04. Lost Wallet
05. 12 Miles Back
06. This Won't Help a Bit
07. Eyes Tell Me, Hands Tell Me

... and don't forget all of the wonderful folks you meet working at said indie record stores...

wow , one of my favorite albums (Googled it, for kicks / yours was the first hit). selected it pretty much at random from a Twisted Village catalog, i believe. Frayed Knots has yet to disappoint (thanks, btw, for the heads-up on Polvo / will investigate !).

Just so people know, I guess, this is Tom who plays guitar in Major Stars' solo project.

Excellent album. Like Dadamah, I was never sure why they never got more kudos. If you could see your way to posting "Quarantine Heaven," I would be oh so appreciative. All my Luxurious Bags went in a big sell-off to pay for rent in darker times. Cheers and thanks for the awesome blog.

hey kiddies - still available from twisted. if your in the boston area there's a brick and mortar store. if not, theres always mail order:
http://www.twistedvillage.com/label.asp

I prefer the big bag, i think they are more comfortable. I really liked this blog, is very interesting and out of common. I prefer to read blogs which catch my attention and this one achieved. I think is wonderful,and i liked the way how is was written.
buy viagra

Wanted to take this opportunity to let you know that I read your blog posts on a regular basis. Your writing style is impressive, keep it up! replica watches india

All of your posts are well written. Thank you. post free ads