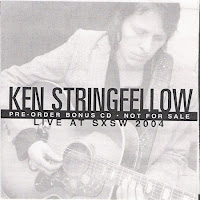 This cd-r of Ken Stringfellow's performance at SXSW in March of 2004, was given away for free with pre-orders of his third solo effort, Soft Commands. No room for Posies (or Saltine) material here folks, but Ken's solo work succeeds just as well by it's own merits. The emphasis here is on Soft Commands selections, as well as choice cuts from his preceding solo record, the even more stimulating Touched. Just Ken, a guitar, and a modest audience. No venue info provided. An impeccable soundboard recording, with entertaining inter-song chatter. No venue info provided.

hey and thanks for the really great stuff up here.

downloaded this but the rar archive doesn't extract properly. it stops at track 9 with this message :

Link is dead, but would love to hear this.

Would you please consider a re-up?

Please re-up this. I would love to hear it. Thanks.