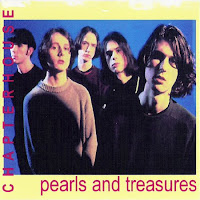 For any of you familiar with Chapterhouse, I need not go into how immensely superb they were, if only for one mind blowing album, 1991's Whirlpool. For everyone else, you can safely be forgiven, as it probably isn't your fault that you haven't been acquainted with them, thanks to the press and indie radio stations that were too busy drooling on themselves over much more anointed dream-pop titans of the era, My Bloody Valentine and Lush. Though this Reading, England quartet were of first class caliber, they were forever treated as second-string newbies, and never enjoyed the limelight. As far as early '90s shoegazer rock goes, there were many outstanding bands, but I have yet to find one that was as ethereal, transporting, and utterly engulfing as Chapterhouse.


Though they blew it on their 1993 followup, the dance heavy, Blood Music, and split shortly after, Whirlpool is crucial listening. You can obtain the 2006 reissue of it here. To the converted, Pearls and Treasures is a collection of radio session tracks and live cuts from two different concerts, that makes a fine companion to the band's halcyon era album. I know, like you really need three different versions of "Something More" on one disk. Chapterhouse weren't terribly prolific, so take what you can get and enjoy.
ripped at 256 kbps

Hey, not a specific comment to Chapterhouse, but just a thanks for all of your posts. You've put up some stuff I really have enjoyed over the months.

could you re-up the link to part 2? Seems it's gone for Rapidshare. Many thanks and a superb site!

Likewise can you reup the part 2

Keep up the good work, Thanks

many many thanks for the Reupload!!!!

re-up all of this?

Careful with that Whirlpool reissue, early cds were ripped from a nasty mp3 source.

Hmmm. Not encouraging since I bought the reissue right when it came out. Hope they rectified that.

Where can I find this 'Pearls and Treasures' CD compilation?

Picked up Whirlpool when it was released and it is top drawer. Not mentioned is their single thatt came out shortly thereafter - Mesmerise - perhaps the pinnacle of shoegaze.

Also, Global Communication's reworking of Blood Music is an excellent IDM release from around '94.