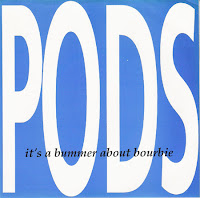 As Evan Dando said himself, "I"ve never been too good with names." If you happen to be Ben Deily, former co-singer/songwriter for The Lemonheads, I suppose you'd have a right to harp about the fact that said band forged ahead without you, retaining the moniker in the process. The cutoff point for Deily was shortly after their third and final Taang! Records album, Lick, released in 1989. Not only did Deily jump ship, but bassist Jesse Peretz departed as well. The Deily-helmed Pods (yet another power trio) arose almost immediately afterward, but made a minimal impact in comparison to Evan's "altera-hunk", Spin-cover adorning status that was shortly in the offing.


During the Deily era, The Lemonheads produced three rough and tumble punk-pop doozies - Hate Your Friends (1987), Creator (1988), and the aforementioned Lick. Dando unarguably dominated this trifecta of barn-burners by leaps and bounds, but the notably higher-pitched (not to mention a bit hoarse) Deily left his mark with some considerable songwriting contributions, including lacerating offerings like "Second Chance," "Uhhh," "Ever," and a walloping reworking of "Amazing Grace."


While the exact impetus for Deily's resentment of Dando remains something of a mystery (at least to myself), you can do a lot of reading into It's a Bummer's... lead-off cut, the fairly telltale "Name In Vain." Maybe there's more to the story, or maybe there isn't. The rest is purely conjecture I suppose. With the emergence of the Pods came a rapidly maturing and lucid-throated Ben Deily. "Name In Vain" is the 'statement' here, but the keeper is the flip-side's "New Stings," which really finds the man coming into his own. This single was followed up with a just as worthy album, Where I'm Calling From in 1994, but both didn't enjoy wide-scale release or promotion.


IMHO Deily's departure from the Lemonheads was appropriately timed, as I seriously question if he would have inhabited a comfortable spot on the refined 'heads albums to follow, specifically It's a Shame About Ray, and Come on Feel... Unfortunately he wasn't able to stake his own legacy with the Pods, or for that matter, as a solo artist. I guess we can't all grow up to be "alterna-hunks," can we?
01. Name in Vain
02. Can't Win
03. New Strings
04. Blackout
https://www68.zippyshare.com/v/xix7rbVc/file.html
Posted by spavid at 5:47 PM

Peretz left after 1990's "Lovey" to enroll in film school, then came back to direct several of the Lemonheads' videos during the "Ray" and "Come On Feel" years. Deily and Dando both say they're friends now, but "Name in Vain" does sound like Deily's chance to vent about his years in the Lemonheads. Thanks for the songs!

Forgive me, but in truth some of us never had even the remotest desire to grow up to be "alterna-hunks." Heck, or even songwriters, for that matter. Surely even a music journalist knows that some of us grew up with a deep longing for something a bit more, um, prosaic?
(Which, if one were wondering, is indeed why I quit a certain band to pursue other things: married life, a home, the career I always wanted...)

Thanks for the generous shout out re: pods, though! Awesome. For a strictly weekend-warrior, non-promoted thing, I'm pretty proud of the stuff we concocted. (Heck, we even got played on the BBC by John Peel. No idea how THAT happened.) :-)

Your take on "name in vain" is thoughtful & largely accurate, although I guess the wider world never got the in-joke re the significance of the name "Bourbie." (That gag was solely for the benefit of Dando, Strohm and me. You know how it is with self-indulgent/self-referential band humor--eye roll.) But the long and the short of it is that the song was written in specific reference to a private conversation Dando and I had quite some time before I quit the outfit, which I knew he (and only he) would really understand.

Eh, I suppose I'm not surprised that the song gave rise to rumors of an epic "rift," rather than simply being understood as a private mourning/reckoning/pissed-off meditation on my part about a very specific grievance. And even though Ev and I NEVER in fact fought or feuded--heck, I was in the studio while they were recording & mixing "Lovey"--the "Deily and Dando fight" meme always stuck. (Per above, I guess that's as much my fault as anyone's. Sigh.) :-) More than anything else, I guess it's hard to kill that kinda thing if it (1) makes a good story or (2) fits a familiar archetype.

P.S.: While I still don't find much time for music these days, the wife and I manage to dust off our outfit Varsity Drag on a regular basis--there have been a couple of records since '06 on the BossTuneage label, an invitation to NXNE, and a European tour-cum-vacation or two. (In fact, we played our NYC debut last summer with Ev's latest Lemonheads incarnation.)

You can hear the lot anytime at our Varsity Drag bandcamp page.

Thanks again for the mention! Love the blog.

BD, really enjoyed reading your post (albeit 5 1/2 years after you wrote it.) I always read the BD-ED feud story with you as the bitter cast-off. Glad to get the record straight. Really enjoyed those early lemonhead albums, much more enjoyable than the mush that immediately followed. cheers!