Never heard of Smudge? Chances are, if you're a Lemonheads fan, you have likely heard Tom Morgan's (Smudge frontman) songs, including "It's A Shame About Ray," and "The Outdoor Type." In fact, co-songwriting credits between Tom and Evan can be found all over Come On and Feel the Lemonheads. Defunct (with the exception of a few recent one-off gigs), co-ed power-trio Smudge hailed from points south, Sydney, Australia to be exact. Evan Dando has returned the favor by penning songs for Morgan, as well as a tribute song to Smudge drummer Alision Galloway, in the form of "Alison's Starting to Happen" from It's a Shame About Ray. 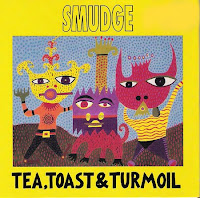 Smudge existed for the better part of the '90s, but only their first two albums saw any distribution in North America. Morgan and Co. had a penchant for up-tempo, riff-happy power pop with an emphasis on conciseness and the kind of hooks to give a right nut for. 1993's Tea, Toast & Turmoil was their debut album, rife with bitchin' two-minute ear confections, adorned with clever wordplay. In a perfect world, "Spoilt Brat," and "Don't Want to Be Grant McLennan" should have been universal classics that usurped the hollow dreck churned out by such embarrassing contemporaries as Hootie and Collective Soul. 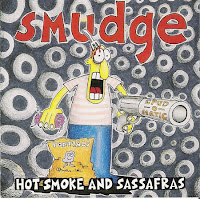 The Hot Smoke and Sassafras ep came a year later, delivering more brisk, tongue-in-cheek tunes. Manilow, their second proper album broke Smudge to a larger audience in Oz, but did little to make waves Stateside. The two disks this post concerns are out of print, but Manilow was reissued as a splendid, two-disk deluxe edition, on Half a Cow Records.
"Somewhere between the Lemonheads and Husker Du, she keeps on getting on top of the sink but she can't get on top of you." from "Alison"

These are now available on iTunes and Amazon.
Posted by spavid at 5:21 PM

wow, smudge sounds like an excellent band. thanks for the albums.

i have one small request if that's possible. could you please upload something from bands such as butterglory & tsunami? Any full length from versus would be appreciated as well.

You're doing a great job, keep it up!

Hello. This post is likeable, and your blog is very interesting, congratulations :-). I will add in my blogroll =). If possible gives a last there on my blog, it is about the Livros e Revistas, I hope you enjoy. The address is http://livros-e-revistas.blogspot.com. A hug.

Do you have Mike Love Not War. I really want to hear Smudge's version of Weep Woman Weep.

Hello again
Can you please repost these Smudge apbums?
Thank you very much
Stathis

Thanks for the request, but I've been meaning to update this informing everyone both of these are now on iTunes and Amazon downloads. Hope that doesn't bum your trip.