Welcome to night three.  Now, after this trifecta of short form 12"s (EPs, duh) you might be asking yourself, is this really the best he could come up with this year? Well...yes, the best I had time to listen to anyway.  Every year I must come into possession of 20-30 eps from the 1980s that never made into the digital era, and believe it or not I may not get a chance to listen to all of them in depth - or even until a subsequent year.  In short, here's what rattled my bones in 2019. 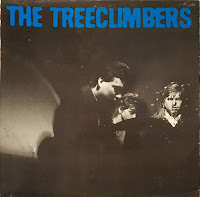 Now this one I was real eager to pick up.  You might say Seattle's Tree Climbers (spelled as one word on the cover, but as two on the spine and just about everywhere online) were a pre-supergroup of sorts, featuring no less than three members that would go onto more prominent roles.  Foremost among them, bassist Jonathan Poneman who would in a few years become co-founder/owner of Sub Pop Records with Bruce Pavitt.  Guitarist Gary Thorstensen became a member of Tad, playing on all of that hallowed trio's Sub Pop releases (God's Balls, 8-Way Santa, etc) and even a bit beyond.  Loren Evans was front Climber, and in the early '90s went onto lead another obscuro Seattle fave of mine, Gnome, albeit his vocals sounded completely different there than what you're about to hear on this record.  At any rate, the word "grunge" was nowhere near the Tree Climbers vernacular, who instead sported a clean, alt-rock aplomb that didn't really steer towards any particularly describable angle, merely they had a batch of excellent songs.  "Second and Counting" and the sax driven "Chills" had very faint latter-era Roxy Music tendencies, but in reality the Climbers were more muscular than that.  Track two, the driving "On Location" is the one you're most apt to get stuck in your noggin.  The band's roster numbered five members, yet only three are depicted on the sleeve.  Hmmm.  Just wish there was more where this 1985 ep came from.  You can read a little bit more about these guys here. 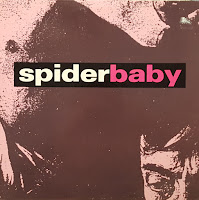 Regrettably I don't have very many pertinent details regarding Spiderbaby.  I first made my acquaintance with this L.A. combo via Flipside's The Big One compilation, but they largely fell off my radar until I found this disc from 1988. The two bookends here, "When I" and "About Her" exemplify everything I love about melodic, indie guitar rock, only these co-ed kids managed to shoehorn a little piano in there as well.  "Pilsner Song," as you might surmise is a lager anthem of sorts, with a suitably catchy blue-collar chorus.  The only other tune I have yet to mention, "Twisted," sort of has it's own vibe.  Spiderbaby also laid claim to a 1992 album that I do believe I need to get my mitts on. 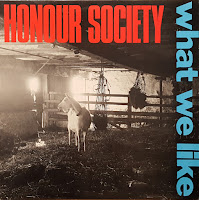 Honour Society, as it turns out, aren't as much of a cold case by virtue of the band maintaining a Soundcloud page with an ample amount of content.  I swiped this bio blurb from their page, because I really couldn't put it any more succinctly myself.

Honour Society lived from 1984 to 1990. The brain child of Dean Wilson, Honour Society played and recorded around the Philadelphia area while hailing from Wilmington DE. Dean continues to play and record. The latest incarnation can be heard as 'Illyah Kuryahkin' with several releases through Arena Rock Records.

Not unlike the Tree Climbers (profiled above) Honour Society mingled nicely with what was happening on left-of-the-dial outlets circa this record's '88 release.  I can't get enough of Dean Wilson's clangy, ringing guitars which really fused "Ambition" and "Faith" into primo, collegiate rock pearls that deserved a much more renown fate.  What We Like isn't wall-to-wall excellence but there are enough moments that come close.  The last track is an untitled/unlisted six minute acoustic demo.  Besides a flexi disc, this was their only commercial release.  Per the bio above, check out Dean's follow-up stint, Illyah Kuryahkin if you enjoy what you hear.

For anyone interested in Gary Thorstensen's more recent work: https://guestdirectors.bandcamp.com/