Alright ladies and gentlemen.  Welcome to night five of Chanukah.  Since this entry concerns six singles it might have more sense to wait until tomorrow night, but my hectic schedule won't allow that.  I skipped the singles bundle last year, but not this one.  It is a little more time consuming to string this array of 45s together than you might think, so I hope you'll excuse me if the "essay" portion of this entry seems a little brief.  Maybe it will encourage more downloads if my brevity lends a sense of mystery to this whole endeavor.  Hmmm...  All audio files have been bundled into one folder, with links at the tail end of this write-up. 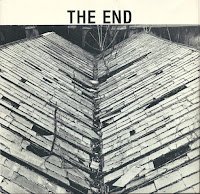 I suppose I'll start with my choicest find of the year.  The End were composed of three Dallas denizens, who eventually renamed their unit End Over End.   Theirs wasn't very typical of the whole "Deep Ellum" sound, rather this trio were more content to wallow in post-punky entrails.  Not quite goth mind you, but boy did they nail that echo-y guitar tone on both of these numbers.  Kinda reminiscent of those early Comsat Angels albums like Sleep No More, albeit End's frontman Tench Coxe is a lot sweeter in the vocal department. 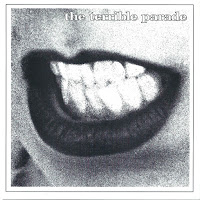 No strangers to this page, I featured the Terrible Parade's first and only album a good ten years ago.  I like virtually everything I've heard by these Cleveland, OH anglophiles and these two numbers cut the mustard as well.  The band evocatively ponders how life would change if they were to win a certain sweepstakes in "Ed McMahon Says, " while the acoustic flip, "Telephone Man," entails an unrequited romance.  Thematically it's not far removed from a similarly titled song from a charting R&B outfit had a few years prior, but trust me, I prefer Terrible Parade's take on this premise just about any day. 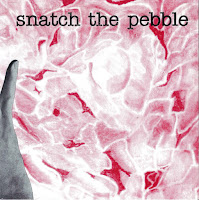 Up for a slice or two of sublime, distortion-laden dream pop?  Sure you are.  I'm pretty much turning up goose eggs on this woozy quartet, presumably from Florida.  Per Discogs Snatch the Pebble had a mere three records to their credit and this appears to be the middle one.  And they did their thing splendidly on this 7" circle of manicured noise, not unlike their equally arcane but excellent contemporaries Ultra Cindy and Smashing Orange.  True, StP may not have been originators of the form, but they're phenomenal practitioners, especially on the A-side "way." 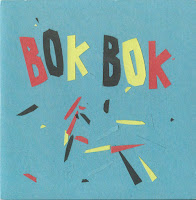 You could say that these UK pop-punks were an offshoot of an offshoot.  A little known band called The Teardrops came into being circa the very end of the '70s featuring alumni from the Buzzcocks and Fall.  I don't own the Teardrops lone album, Final Vinyl, but I've heard it, and sad to say it's downright mediocre, embarrassingly so at times.  The 'drops were out of commission by 1980, and two of the members Steve Garvey (ex-Buzzcocks) and Fall-guy Karl Burns incorporated Bok Bok with a mouthpiece named Dave Price for what turned out to be a self-released, one off single (this one).  In a nutshell, both songs from this fleeting project fulfilled the promise that the Teardrops never capitalized on.  "Come Back to Me" and "Misfit" definitely owes a bigger sonic debt to the Buzzcocks than Mark E. Smith and Co., and given the caliber of these tunes I wouldn't have done things any differently.  The single was released with an alternate sleeve for Record Store Day 2014, and unsold copies may still be available here. 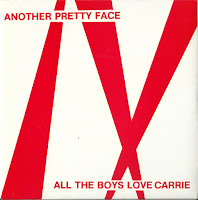 Another Pretty Face - All the Boys Love Carrie/That's Not Enough 7" (1979, New Pleasures)

The Scottish born and bred Another Pretty Face put out this thoroughly winsome wax forty years ago, and could have almost tricked me into thinking it was some long lost Stiff Records artifact.  We're treated to five and a half minutes of old school power pop bliss a la Any Trouble and Dirty Looks, perhaps even a smidge of the Undertones and Records.  "All the Boys Love Carrie" is a classy and perfectly executed banger and it's flip-side is no slouch either.  Four singles and a cassette album was APF's recorded legacy, this 45 being the first of all of them.  They certainly don't churn 'em out like this anymore, but luckily we can take a spin back in time anytime we want. 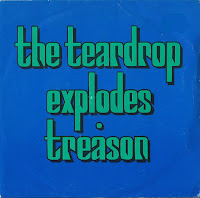 And finally, I'm tossing in one a good lot of you should have some familiarity with.  This, as they say, is a gem.  A pearl.  A nugget of gold.  The Teardrop Explodes were one of the most successful and innovative bands to have emanated from Liverpool, England, post-Beatles.  "Treason" illustrates precisely why, and is the band's finest moment alongside the almost equally appealing "Reward."  In case you don't know the story, after the band's dissolution, prime mover Julian Cope ventured out off onto a successful solo career, yielding gold albums...and as you may know, the usage of all manner of hallucinogenics.  Here is the first of two incarnations of the "Treason" single, this one backed with an Echo & the Bunnymen cover, and released independently on the band's own Zoo! imprint.

in the 80s Dallas had a pretty good post-punk scene buried deep within its confines....I have this single...somewhere. the more poppy bands got the attention but there were some pretty dark UK-indebted post-punk groups, too.

Joseph Kyle might remember Legionaires Disease, great band. Thanks for all these marvelous gifts and happy holidays to you as well.

I'm not sure how I found out about The End. Ebay maybe? Fine stuff.

Great Stuff!!! I know Another Pretty Face contained pre-Waterboys Mike Scott........on the sleeve it mentions William Mysterious on sax (which i think the song could've done without), and i think he played here and there for the Rezillos/Revillos at times perhaps.......THANKS!!!!

I always ask this and I don't know what makes me think you could ever answer, but if not from you, how do I already have Another Pretty Face?!?

Neat. The drummer for Snatch the Pebble played drums for our high school chorus/glee club, albeit the whitese glee club you ever saw. My copy went in the great divorce sell-off, so it's nice to be able to listen to it again. THank you!

I had always hoped my band would show up someday on Wilfully Obscure. Now it has!
Glad you enjoyed the singles.