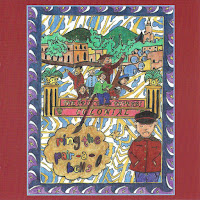 This bygone New Hampshire quartet were audacious enough to dub themselves after a vintage Fender amplifier.  Furthermore, The Princeton Reverbs Colonial also had the audacity to limit the release of certain full length albums to a mere one hundred copies.  Luckily, the one I'm presenting today is considerably more findable, and find it you must because the Reverbs were all about wrenching warm, analogue hues from just the kind of apparatus they purloined their moniker from.  It could quite easily be a coincidence, but perhaps their close proximity to the Canadian border informed them about bands from such locales as Nova Scotia, 'cos I'm hearing heaps of fuzzy, mid-fi guitar rock a la Eric's Trip and early Hardship Post populating some of ring the pair-a-bells finest endeavors like "He Interprets the Dream" and "Calliope."  Upon unfurling what little of the band's history I was able to glean, I learned the Reverbs had ties to the Elephant Six collective, including working with Bill Doss of that movement's preeminent outfit, the Olivia Tremor Control on this very record.  Any experimental/neo-psych affectations that crop up on ring are faint at best, but if you're familiar with the aesthetics of such aggregations as Apples in Stereo and Beulah you have some throwback feels in store for you, albeit intermittently. And I'll be damned if the illustration on the sleeve doesn't resemble that of an Of Montreal pictorial.

thanks a lot for the album!
Regards

Such a great record and I've never heard anyone talk about it besides me! I wrote a review of this on my blog too once upon a time, which also features obscure music.

Ha! This is great! I was in this band and a reader of this blog. Amazing. Thanks for getting this out there!