They're not often spoken of, but in the rare instances The Necessaries name pops up, it's almost always with a certain amount of reverence.  Never heard of them?  Despite having two albums on Sire, and serving as a launching pad for the late singer/songwriter/composer/avant-ist Arthur Russell, there's been no effort up until very recently to acknowledge the existence of this often stunning quartet. 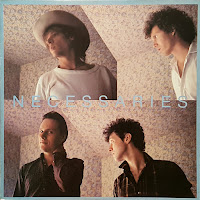 Formed in 1978 and originally consisting of renown producer/performer Chris Spedding on guitars, Ed Tomney on lead vocals/gits/snyth, ex-Modern Lover Ernie Brooks on bass and Jesse Chamberlain handling percussion, the Necessaries were lazily pegged as power pop.  Not aggressive enough to be classified as punk, nor did they possess the flowery adaptations to attach themselves to the coattails of the budding New Romantic movement, the Necessaries may have lacked an uber-colorful identity, but had integrity for miles.  Unfortunately, integrity will only propel you so far, especially if you're under the wing of a major label.

Chris Spedding didn't even stick around long enough to appear on the groups first single, 1979's John Cale-produced  "You Can Borrow My Car" for I.R.S.  In fact, by the time Necessaries debut, Big Sky, he was replaced altogether by Russell.  An album, especially a debut needs to start out with a bang, and Big Sky does precisely that via the sonically advanced "Back to You," a flabbergasting melange of dueling staccato/chiming fretwork, Tomney's spoke/sung prose and a sophistication beyond the band's collective years.  "Driving and Talking at the Same Time," tamps down the dynamics a bit in favor of a breezier mystique that subtly channels everyone from the Talking Heads to Television and even Roxy Music.  Then we're soaked in the rolling boil that is "Born Yesterday," a piece that taps into the acumen of contemporaries X, simultaneously offering a wink and a nod to '70s, New York proto-punk.  If the Necessaries had stopped at just those first three songs, they would've one of the finest EPs of all time on their hands, but they were only getting warmed up, as the album continues for eight more songs.  Some of the remaining numbers are more essential than others ("Detroit Tonight" and "My Baby's Explosive" are favorites).  The record skews more towards post-punk than rote, four chord power pop.  Particularity demonstrative of this, "On the Run" finagles with skittish Gang of Four guitar interplay.  To my ears, Big Sky contains nothing dismissive. 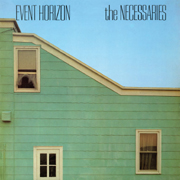 Apparently the band and/or management didn't see it that way, because in 1982 the record was apparently withdrawn and dramatically re-calibrated with half of the original track-listing removed/replaced, rechristened with a new title (Event Horizon). and given a wholly different sleeve.  From what I've been able to glean, Event Horizon was only released to European markets, and both albums were out of print for decades, until the UK based Be With label reissued Horizon in 2017 in an exclusive vinyl edition.  If you enjoy what you hear on Big Sky, please considering purchasing the reissue (linked above).  A full review of it can be imbibed over at Pitchfork.

The Necessaries svelte discography could fit comfortably on a single compact disc (hint, hint Omnivore), but either Tomney & Co. or Sire have been resistant to migrating the band into the digital era.  It's something that's frustrated me for ages, so I'm happy to provide you with half the story, and as mentioned above the rest can now be purchased.  Arthur Russell was the only one in the Necessaries lineup to enjoy any visibility after the band dissolved, that was until his untimely passing in 1992.  A recent collection of unreleased demos, (Iowa Dream) saw the light of day in '19.  It, along with a healthy swath of his discography is available on Bandcamp.

thanks...i remember buying the first version of this in maybe like 1984 or so and think why they did not go further? they seemed to have some quirky things sorta like The Feelies, but i guess with NO promotion or traction, yet again, things went nowhere.....

Like so many gems listed in the Trouser Press books, I looked for both of these albums throughout in the 80s as they were, as you mention, not released in the US. Finally found them sometime in the early 90s. "Event Horizon" was somewhat of a disappointment then but "Big Sky" was a thriller with incredibly strong songs like "Europe", "Algegra" and others. Was glad to see the '17 reissue but $30 on LP for "Event" did not work for me, though would not have hesitated w/ "Big Sky" project....agreed, "Omnivore"?!