And so we bring Chanukah to a close with a veritable doozy.  If you're at all surprised I went with XTC to close things outs, that's understandable, because in the past twelve years I think I've mentioned them by comparison at best.  So why did I finally take a full scale plunge into the realm of Andy Partridge, Colin Moulding, et al?  Essentially this bundle of relatively uncirculated booty was too good to keep to myself, and I had a hunch it would have a lot of welcome ears in this humble cyberspace outpost. 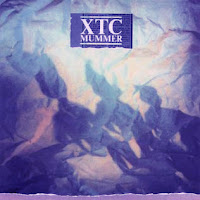 I've been an XTC fan since Oranges and Lemons, though wouldn't consider myself  a hardcore adherent, and by no means a completist.  I'm not sure if I have a favorite XTC album, but I indeed have a preferred era, namely Mummer, The Big Express and Skylarking.  To one extent or another, the band were considered eccentrics from the outset, and while always on the more creative end of the post-punk continuum, this perception would multiply by the mid-80s, in large part to Partridge's 1982 announcement that XTC would cease to exist as a live performing entity, due in large part to a growing intolerance towards touring and almost paralyzing bouts of stage-freight.

And with this development Mummer was eventually born, XTC's sixth album.  Feeling more unshackled than anytime before, Partridge was at ease in exercising his idiosyncratic muse.  As he put in a 2006 interview, "Quitting touring allowed us to go Technicolor," - not unlike the Beatles when they made the decision to becoming a studio-only entity towards the middle of their career.  XTC's creative development on Mummer was a stepping stone to what some regard as the band's visionary apex, 1986's Skylarking.  In an increasingly elaborate move, key album cuts like "Great Fire" and "Deliver Us From the Elements" exuded pocket-orchestral sweeps.  While not as elaborate, "Beating of Hearts" and "Human Alchemy" were vividly textured, and elsewhere Mummer emanated pop grandeur as only Partridge and Co. could on "Love on a Farmboy's Wages" and "In Loving Memory of a Name."  In fact, Mummer was an out-and-out fantastic XTC album, that is in it's original 1983 incarnation.  The 1987 expanded CD edition included six extra cuts, many of which sounded like mere afterthoughts.  This wasn't frustrating in itself, so much as the decision to insert them smack dab in the middle of the record's original running order, thus breaking the continuity of an otherwise consistent album.  Always been a gripe of mine, but I digress.

With that brief critique/history out of the way, I present you with two sets of demos.  One consisting primarily of Andy Partidge's home demos, and another entirely different set of "rough drafts" providing an alternate working version of Mummer.  In fact it even had a working-title, Fallen From the Garden.  Between these sessions are no less than 34 tracks, with some significant title overlap mind you.  Represented are all ten songs from the original vinyl variation of the record in question, and a healthy amount of outtakes. Some of these would be hammered out to perfection and utilized as b-sides and the aforementioned CD bonus tracks, while a few like the excellent "Young Cleopatra" would find their way onto XTC fan club cassette releases.  Although they're amusing to listing to in prototype versions, it's understandable why pieces like "Monkeys In Humanskin Suits" and "Do the Dwarf" were left on the cutting room floor.  In the grand scheme of things these demos and early takes reveal quite a bit - not only the genesis of several future XTC classics, but where Andy's head was at in the wake of unshackling himself from the rigors of being a live performing artist.   Enjoy (or not).  A big round of applause to whomever went to the trouble of digitizing these tracks.

you're a mensch! I have yet to understand why they didn't give Mummer this same treatment in the reissue series

Thanks for these! @Joseph Kyle, I believe the reason Mummur hasn't gotten the deluxe treatment (yet) is that some of the multi-tracks are missing.

Wow! Treats from one of my absolute favorite bands. I consider Andy Partridge to be the finest pop lyricist of the 20th century. (Well, he's my pick, anyhows.) Thank you so much! And for any XTC fans out there who haven't upgraded to the Steven Wilson remix BD/CD sets... shame on you! They're fantastic!

@joseph kyle, as I understand it, Steven Wilson only worked on the albums for which they had the original multi-track master tapes. Shockingly, it seems that the masters for some of their albums are... Missing? Destroyed? Hidden? Whatever the case, the article/interview I read made mention of this "only from masters" situation. I'm just as bummed as you are. At least we got what we got!

Thanks Pernt. I really need to get caught up on those XTC bluray book sets before they get gone. Was wondering why they hadn't done the rest of the albums myself.

Thanks for another great year!!

Any chance I could talk you into re-uploading or using a different sharing service? Not sure if they're expired but it just loops me through some possibly virus-addled hell. Much appreciated, I've been looking for these tracks forever!

Can I second the above comment... please reupload Fallen from the Garden (flac) somewhere, please.