Now for some unreleased stuff.  Teenage Fanclub.  I'm a bigger fan than you might think.  Up until now I haven't shared much by them, and it's likely to stay that way since the bulk of their material is still available.  My first encounter with the Fannies is still pretty vivid.  By the miracle of in-store-airplay at Erl Records in Albany, NY circa early 1991, they were spinning The "God Knows It's True"/"So Far Gone" 45 on Matador.  It struck me as melancholy, perhaps even a tad depressing, but a visceral love at first listen.  I quickly picked up their first album (on cassette no less) A Catholic Education, and was generally treated to more of the same.  At that phase in T/F's tenure they weren't regarded as pop purists, and from my standpoint they may as well have been an emo band...but anyway.  Was thoroughly on board for Bandwagonesque too, and subsequent records like Grand Prix and Songs From Northern Britain stand as pop/rock pillars for the ages. 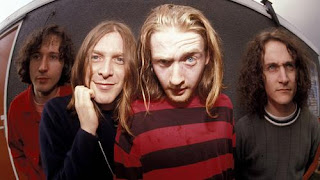 Submitted for your approval is a collection of twelve, early-ish demos surrounding the aforementioned first T/F albums, A Catholic Education in 1990, and Bandwagonesque following a year later.  The source of these tracks are unknown, but it looks like they've been in low circulation at best.  In most cases they're markedly different than the finished versions, making this a pretty sweet revelation.  A lot of the "hits" are unaccounted for here - "Radio," "What You Do to Me," "Star Sign," etc.. but I'm down with deeper cuts anyway.  We're treated to a sublime, eleven and a half minute reading of "Alcoholiday," and early takes of "Everything Flows" and "Guiding Star" give me an even greater appreciation of songs I thought I couldn't love more.  The demo specimen of "Pet Rock" is totally acoustic, and a cover of "I've Got a Feeling" doesn't appear to have carried over to any official release in any rendering whatsoever.

But *sigh* there is a snag, and kind of a bummer at that.  The concluding piece, "Metal Baby" inexplicably cuts out shortly after the two minute mark.  A pitiful shame because not only is it one of Bandwagonesque's halcyon moments, but the version here is extra raw and distorted, almost over-modulating into the red.  If anyone has the complete version of it, please speak up.  BTW, I won't be sharing this one in FLAC, as I could only locate it in it's MP3 incarnation.  Enjoy, warts and all.

Man, thanks for all the detail w/ these tracks!

wow cant wait to hear this! thank you, thank you thank you.