Fifteen seconds is all it took to sell me on The Big Picture.  I found The Homeless House while browsing a shop in Akron, OH last year.  The sleeve intrigued me.  I inquired if there was an in-store listening station where I could preview it.  Nope...but the clerk kindly offered to throw it on the store's turntable.  And within fifteen seconds of absorbing the opening of "Poison Town" I knew this was going home with me. 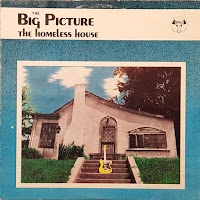 In case you're wondering BP were not local to Akron, or for that any matter any locale in the Buckeye state, rather Mississippi.  In fact, once I took a closer look at the back cover it was obvious that these gents were in cahoots with an even more established MS band of the same ilk, the Windbreakers, whom BP also shared a producer with, Randy Everett.

By the mid-80s, the Windbreakers, featuring the songwriting duo of Tim Lee and Bobby Sutliff, had staked out a reputation for themselves as part of the vanguard of southern "new music" that had made national inroads at college radio outlets. While generally cut from similar cloth as the 'breakers, the Big Picture opted for a slightly less rambunctious tact, slotting in a little more closely with contemporaries the Grapes of Wrath, Fire Town and Dreams So Real.  Per the album itself, the aforementioned "Poison Town" is an anthemic, indie rock clarion call of a song most bands would trade a collective limb to possess in their repertoire, even surpassing the Windbreakers strongest material.  It's a near perfect mesh of crunch and jangle with chiming arpeggios and a gripping melody. While I can't say there's much else on side one that can compete with it, the second half of The Homeless House is markedly more consistent, where you're bound to hear something fetching virtually wherever the stylus drops.  Best of all, this trio thoroughly circumvents the gaudy superficiality the '80s gave us in such abundance. My much belated discovery of BP may not qualify as an outright revelation, but the band's most intoxicating songs often project such an illusion...if that make any sense.  Enjoy, and feel free to shed any light on these guys, as I can't find anything relevant on (or off) line.

This is a great choice for a Chanukah night. I've owned and enjoyed this one since probably the late 1980s and it has crossed my mind that it might one day make an appearance here... you've surprised me before by posting albums I own, some that I had not yet had a chance to listen to. Thanks for the info and Flac rip... "Say No More" is the track that has turned out to be my favorite after years of listening.

Oh man... another one of those "where have you been all my life?" albums. Listening to this takes me back to my college days. I would have had this in my Aiwa tape player as I sat in my computer lab all night long. Man, thanks for yet another insanely great discovery. As usual, visiting this blog has been one of the best parts of my day.

Wow, great stuff, THANKS!!! i believe guitarist Jeff Lewis played with the Windbreakers on their "Meet The Windbreakers" EP in '82..........

You never cease to amaze and blow me away with your deep, vast knowledge on...well, pretty much anything 'n everything w/ music! INCLUDING when you don't know much about a band! Fascinating - never have seen or heard this before. Great find!