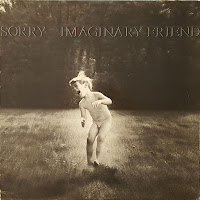 Remember when I took to task Sorry's '86 platter The Way it Is and blabbed something about their earlier "rough and tumble" hardcore years?  Well, you're about to hear what Sorry's nascent era was all about it, by way of Imaginary Friend.  In the form of eighteen cuts to be exact, many of which clock in at under ninety seconds, but if you're expecting fearsome, symmetrical slammers all cut from the same cloth think again.  Boston born and bred, this quartet weren't really along the lines of their hometown's more renown SS Decontrol or Gang Green.  Even back in '84, Sorry were picking up on the vibes of relative newcomers Mission of Burma, Volcano Suns, and early Husker Du - albeit not as effective, and definitely not as consistent.  They had a penchant for sloppiness and spouted an array of dissonant affectations that were a hell of lot more chaotic than calculated.  Most of IF's more notable moments reside on side one, entailing "Misanthrope," "One More Step," and "Doomed From the Start," the latter of which features none other than Burma's very own Roger Miller on keyboards, of all things.