Adrian's Childhood - Sometimes I Feel Myself That Way (1990) 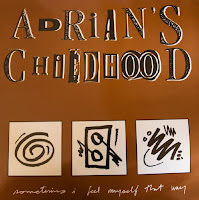 The little spoken of Adrian's Childhood were from said to hail from Seattle, but amazingly don't emanate a shred o' grunge.  More like turn of the decade alt-rock with nods to the likes of the Connells, Ocean Blue, and for better or worse Live (the band).  There's some tastefully executed jangle sprouting now and again, really benefiting some of AC's most potent offerings like "Ellensberg" and the deliciously sprite and spry "POP."

I'm not in possession of a physical copy of this one, but whomever converted it to digital, I thank them for going to the effort, and furthermore for attaching four extra cuts that were independent of the Sometimes LP itself.  Given their rawer (and sometimes untitled) nature I have to assume these are demos, which just so happen to rival the album's finest moments.

Thanks! This is a new one. Nice find.

Not sure how you got to Adrian's Childhood but thanks for keeping it alive and reviewing. If you'd be interested in a clear vinyl LP copy I think I have a few laying around. Best Robert ~ Vocalist / Guitarist Adrian's Childhood

Hi Robert. I didn't see your comment until now. I'd love a copy of the record if you still have one to spare. You're welcome to email me: trusty73@roadrunner.com