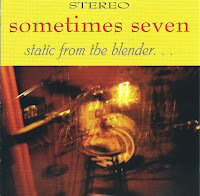 Though not as appealing as their more effective later albums (like 2000's Somehow You Just Don't Get It) I thought it wouldn't hurt to throw this one out there for historical perspective, especially since it's utterly impossible to find.  This indie rock to-the-core foursome seemed to be skewing in the vicinity of some of their contemporaries including, but certainly not limited to, J Church, Small 23 and even the almighty Archers of Loaf.  There's occasional glints of promise on "Call in Blue" and "Slowing Down," but Static... illustrated Sometimes Seven had miles to venture before really honing their craft.

👍 you need anything else S7 let me know also other projects Phil Avalos & The Quiet Lanes, Dead Radio Social & 78 Camaro!